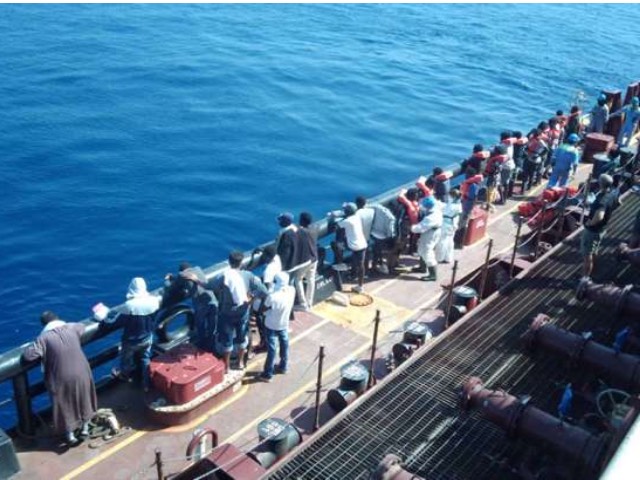 The award follows their rescue of 27 people in distress at sea and their handling of the ensuing situation, the result of a political stalemate, that left them stranded at sea for 38 days. The situation has been referred to as the longest standoff in European maritime history.

“Captain Yeroshkin and his crew went above and beyond their duty in an unprecedented situation,” says Christian M. Ingerslev, CEO of Maersk Tankers. “The award is a recognition of their seamanship, and the values and empathy they embody. Having the stamina to cope with the situation for 38 days, while at all times caring for the people they rescued, is admirable.”

Yeroshkin said that he and his crew are honoured to accept the award, which is being given for outstanding seamanship.

“Receiving the Shipping Award is a great honour. We did our duty as seafarers and human beings, and it means a lot to me that our care for the rescuees and our seamanship are being recognised. I am sure my colleagues at sea would have done the same if they had found themselves in a similar situation – it just happened on our watch.”

Close to ten months have passed since Maersk Etienne was called upon to assist people in distress in the Mediterranean Sea – and still the shipping industry awaits a political solution that will ensure a safe and quick disembarkation of rescuees to avoid a repeat of the Maersk Etienne ordeal.

According to Ingerslev, the award will ensure that what the rescued persons and the crew went through is not forgotten, especially in a time where the need for action remains: “It will continue to be a risk for people in distress at sea and the shipping community until this situation has been resolved politically. A captain should be able to save those in distress at sea with the confidence that relevant governments and authorities will assist in quickly disembarking the rescuees.”

In working to secure a political solution, Maersk Tankers has continued to share its experience of the incident with the shipping community. “We want to help owners and managers by passing on our knowledge, but we also need help. We call on the relevant governments of the European Union to come forward with a solution,” says Tommy Thomassen, Chief Technical Officer at Maersk Tankers. He will speak about the issue again on 1 June 2021 at a forum with members of the European Parliament.

At the same time, Danish Shipping continues its work with Danish authorities, members of the European Union, the International Maritime Organisation and other relevant parties to seek a political solution to help people in distress at sea, merchant crews, shipowners and managers.

The Shipping Award brings with it a prize of DKK 25,000, which the captain has decided to donate to Mediterranean Saving Humans, the Italian non-governmental organisation that finally ended the 38-day standoff for the rescued people and the crew.