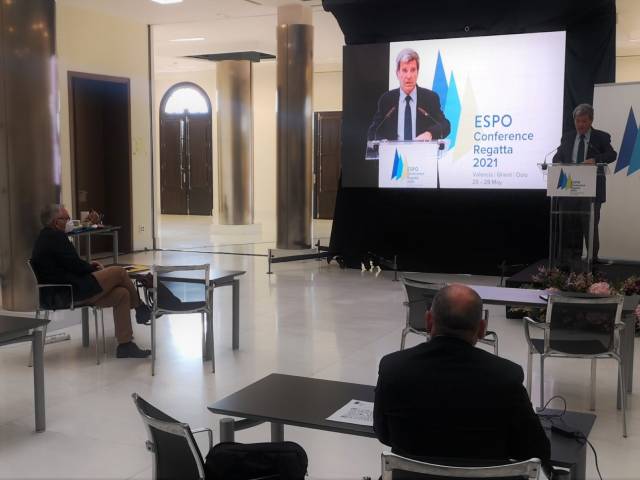 Aurelio Martinez: “We must prioritise management models which allow the ports to coexist in perfect balance and harmony with their environment”

The Clock Building of the Port of Valencia hosted the first day of this conference which will continue in the ports of Ghent and Oslo.

Decarbonisation, digitalisation, use of alternative energies, intermodality and drivers of innovation are some of the common strategic axes in the port areas for economic and social transformation following COVID-19, along the lines set out by the European Union in the Green Pact to develop a sustainable economy. The European port system addressed these challenges at the Regatta 2021 Conference which opened this morning in the Clock building of the Port of València with the intervention of Aurelio Martínez, President of the Port Authority of Valencia (PAV), Annaleena Mäkilä, President of ESPO and Adina Vălea, European Union Commissioner for Transport.

Aurelio Martínez pointed out that this Conference will provide answers to the major milestones that European ports must face in the short and medium term, such as “the future of ports and Port Authorities in the post-COVID era, the continued development of the Trans-European Transport Networks (TEN T), the use of alternative energy sources, which, such as hydrogen, will help to achieve the zero emissions objective”.

These goals,” Martínez continued, “can only be achieved if all the parties involved, private agents, institutions and legislators work together and in consensus in the same direction. The issues we have on the agenda are of such importance that only in this way, through the design and development of a common strategy, can they be achieved.  To this end, it is essential that the dialogue between all parties is fluid and continuous. That the Port Authorities are aware of the specific needs of the different links in the logistics chain, that the agents have first-hand information on the regulations and laws that are on the agenda of the European Union and that the legislator considers the reality and the situation of a complex industry to regulate in accordance with this reality”. In this sense, the president of the PAV has highlighted “the magnificent role played by ESPO as a unifying force for European ports and interlocutor with the institutions”.

For Martínez, “a fluid dialogue in which port-city relations play an important role is fundamental. The progressive integration of the ports in the city landscape obliges the Port Authorities to consider the needs and aspirations of the rest of society in terms of safety, quality of life and sustainability. Therefore, just as we must ensure the normal development of port activity as a dynamic element of the economic growth of our business fabric, we must also prioritise management models that allow the ports to coexist in perfect balance and harmony with their environment”.

During his speech, the president of the PAV emphasised that “the effort made by companies, institutions and administrations has been a key element in calming the economic impact of a global crisis whose repercussions would have been much worse without the participation of the ports”.

Strategic role in the economic and social transformation

For her part, the President of ESPO, Annaleena Mäkilä, emphasised that “we are in a time of change and an opportunity for the transformation of the economy and society after COVID-19 where the port areas will play a key role in the economic recovery. Energy transition and digitalisation are two key aspects on which port authorities are working within the framework of the European Green Pact, the European Union’s roadmap for a sustainable economy”.

The EU Commissioner for Transport, Adina Vălean, stressed that “ports are an example of constant innovation and support for the improvement of industrial activity in their hinterland. The present of port facilities is the investment in multimodality, decarbonisation, use of alternative energies and digitalisation to improve the competitiveness of their facilities within the framework of the European Green Pact”.

The Clock Building of the Port of València hosted the first day of the 17th edition of this annual meeting of European ports, where the results of the recent study carried out jointly by Deloitte and ESPO on the future role of the European port authorities were also presented. In the same way, throughout the morning, different experts in the field debated and made an X-ray of the state of the question. The first day of the Regatta conference concluded with the intervention of the MEP Inmaculada Rodríguez Piñeiro.

Under the slogan ‘European ports at the crossroads of transitions’, the European Sea Ports Organisation (ESPO) is promoting this cycle of conferences, which brings together the most important European ports for three days, to tackle the fundamental role of the port enclosures in maintaining the supply chains during the COVID-19 crisis, as well as their role in the “green” economic recovery and the new “Europe of the 27” after the departure of the United Kingdom.

The event will continue tomorrow from the visitor centre of the North Sea Port of Ghent and will end on the 28th with the session organised by the Port of Oslo from the Clarion Hotel. In all, more than 40 experts will take part to discuss the future of the European ports as driving forces of a strong and resilient European economy and society.