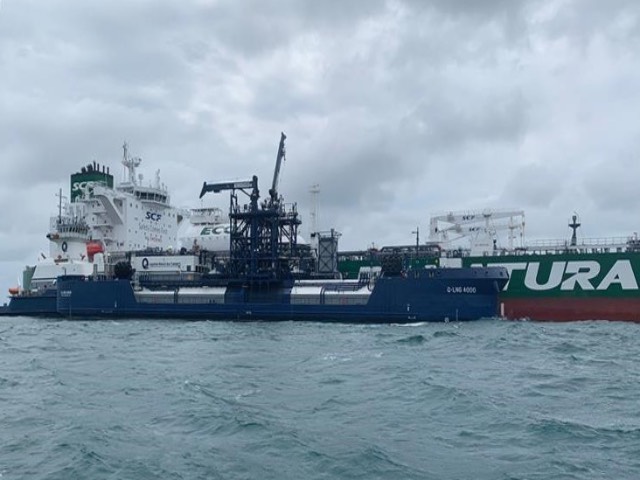 Since operations began in 2018, SCF’s ‘Green Funnel’ Aframaxes have taken over 62,000 tonnes of marine LNG fuel from Shell and all 150 operations were performed safely without incident, injury or loss of fuel.

The 150th operation was performed by Korolev Prospect, on time charter to Chevron, receiving 600 tonnes of marine LNG from Shell and delivered by Q-LNG 4000 outside Port Canaveral, Florida, whilst en route from Denmark to the US Gulf. Chevron is using the vessel to trial the viability of dual fuelled tankers for its future operations.

LNG fuel remains amongst the cleanest burning fuel options currently available for shipping operations. Sovcomflot calculates that since 2018, LNG fuel has helped reduce the total CO₂ emissions of these six ‘Green Funnel’ tankers by over 56,000 tonnes or by over 14 per cent annually on average.

“We are delighted to have reached this 150th milestone together with our partners, Shell. LNG fuelling infrastructure expands as demonstrated by SCF and Shell with a number of firsts in North West Europe and the Baltics in 2018-2019, and more recently in the USA and Mediterranean, so we believe the business case for dual-fuelled tankers only increases further. We remain grateful to all involved ashore and at sea that all 150 marine LNG fuelling operations to date have been performed safely and securely, whether in ballast or laden condition or simultaneously with cargo operations. Ultimately, that is the real achievement.”

“The shipping sector must immediately employ the cleanest fuels available. Today LNG is the choice to ensure we are not adding heavier emitters into the global fleet while we work hard at developing zero-emissions fuels. I’m proud to share that since we fuelled the world’s first LNG-powered Aframax tanker, Sovcomflot’s Gagarin Prospect at the Port of Rotterdam in 2018, we have been able to complete many more operations safely through our expanded fleet of bunker vessels that can be deployed across nine countries and thirteen ports and look forward to expanding this further.”