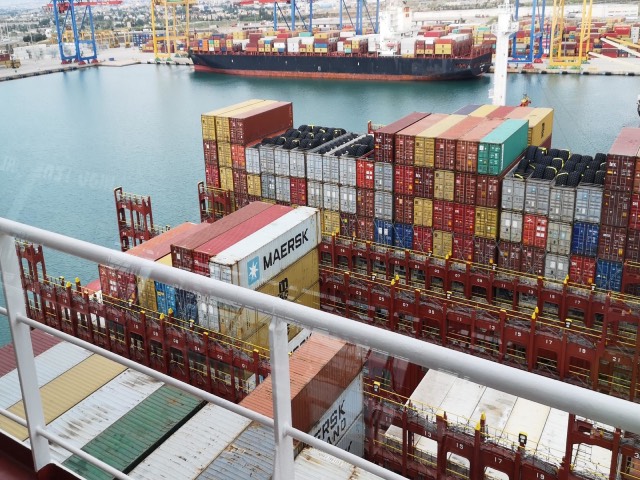 It is also the best year-on-year figure for container movements in the history of Valenciaport. Between April 2020 and this year, 5,542,090 TEUs were moved compared to the previous record of 5,513,371 (September 2019) and well above the 5,173,064 containers of July last year when the COVID-19 crisis hit the economy.

Valenciaport returns to the path of growth, closing the COVID-19 crisis, and with figures that, if they follow the natural evolution, allow us to point towards six million containers.

Cargo containers (exports) grew by 29.45% in the last month analysed in the APV Statistical Bulletin compared to 2020. For the first time, the year-on-year figure exceeded one million (1,007,677) TEUs oriented towards foreign trade.

In the accumulated of the year, the export dynamism of construction materials (+37.44%) and the agri-food industry (+35.45%) is once again outstanding.

Data on goods movements and container traffic from Valenciaport for the month of April show that the port facilities managed by the Port Authority of Valencia (PAV) have closed the crisis generated by the COVID-19 pandemic. In April 2021, the Valenciaport docks operated 479,171 containers, i.e. 26,687 TEUs (standard 20-foot container) more than in April 2019, the year without the pandemic. In relative figures, this represents a growth of 5.9%, while compared to April last year, the increase is 9.9%.

These data are reinforced by year-on-year container management. Thus, between April this year and 2020, 5,542,090 were mobilised, a historic figure for Valenciaport (the previous figure was 5,513,371 corresponding to September 2019-2018), and leaving far behind the year-on-year data obtained in July 2020, when 5,173,064 TEUs were handled (the most complicated dates of COVID-19). Valenciaport’s activity recovers its dynamism of recent years because of the reactivation of Spanish goods and products companies and their exporting vocation. This puts the port facilities of Valencia, Sagunto and Gandia on track to reach six million containers in 2021.

The export flow once again plays a fundamental role. In April this year, cargo containers destined for sales abroad grew by 29.45% according to data from the PAV’s Statistical Bulletin. On a year-on-year basis, Valenciaport exceeded one million TEUs of cargo for the first time in its history, specifically reaching 1,007,677.

Likewise, 1,863,004 containers were handled in this period, 3% more than in the last year without being affected by COVID-19. If we compare the data for the first four-month period with last year, the growth in TEUs was 6.5%, with those destined for export once again standing out, which increased by 20%, while those for unloading increased by +9.25% and those for transit by +4.23%. Empty containers, on the other hand, recorded similar figures to 2020.

Undoubtedly, these data show the capacity of the productive sector of Valenciaport’s hinterland to cope with an exceptional situation marked by the COVID-19 pandemic. The activity of exporting and importing companies is driving Spanish economic activity and the Port of Valencia is the perfect ally to take products to any corner of the world.

In addition, it should be noted that ro-ro traffic exceeded 4 million tonnes between January and April this year, 13.75% more than in 2020.