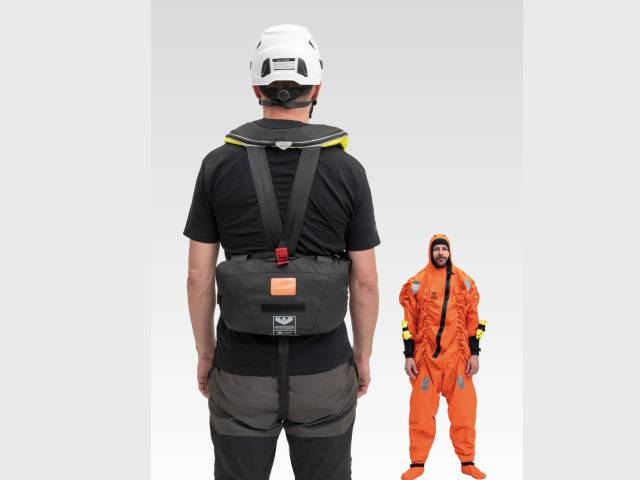 The new VIKING YouSafe™ Walk to Work is a one-size immersion suit airtight packed into a bag that is attached to the user’s lifejacket instead of being worn during the transfer between support vessels and offshore installations. Sealed in a protective bag, the lightweight immersion suit has been developed in cooperation with leading offshore wind and Oil & Gas operators.

Today, crews landing on wind tower platforms from support vessels wear their one-hour immersion suits during transfer. Once on the platform, the immersion suits are simply set aside so that crews can attach their harnesses and get on with maintenance work. One issue is the time-consuming donning and doffing process; the other issue is that when not being used, the suits are exposed to the elements.

Discussions on whether crews need to wear immersion suits is still a hot topic in the industry. “VIKING has decided to rise to the challenge to support crew transfer whether they continue to wear an immersion suit or carry it with them, because carrying an immersion suit brings its own challenges,” says Bettina kjærgaard, Global Product Manager, Offshore Wind, VIKING Life-Saving Equipment. “Minimizing risk should also involve making the safest option the easiest one to choose.”

Transferring while holding a tool bag and an immersion suit bag could be awkward for a crew member or even involve two journeys, she points out, while the vessel’s watch would not be able to see through the bridge rails whether crews are compliant.

“The VIKING YouSafe™ immersion suit bag has been optimized for use with the well-established VIKING YouSafe™ Pro lifejacket and is compatible with most standard inflatable lifejackets used by professionals,” says Kjærgaard. “All compliance issues are satisfied and, if anything, compliance becomes easier than non-compliance. Attached to the lifejacket’s back via strong Velcro straps, the suit bag is clearly visible to the officer on watch while the user has free hands hold on to the rail.”

Tens of thousands of one-hour immersion suits are in circulation to serve the offshore industry in Europe alone. Kjærgaard says that the new SOLAS-approved VIKING YouSafe™ Walk to Work suit has already secured its first orders.

“For example, the number of wind farm technicians continues to grow rapidly and this market is demanding innovation and better quality in the solutions offered to keep crews safe. The VIKING YouSafe™ immersion suit is smarter from the safety perspective because it is always available from the moment the lifejacket goes on. It wins on ease of use because compliance provides greater freedom of movement during the transfer.”

With a three-year service life expectancy, the VIKING YouSafe™ Walk to Work immersion suit is also substantially lighter, weighing just 1.37kg, compared to 4.6kg for a typical immersion suit used in this application, while still maintaining its protective qualities. “I am sure this will be as interesting to the Oil & Gas market as it has already proved among our wind energy customers”, says Kjærgaard.

Kjærgaard adds that the VIKING YouSafe™ Walk to Walk immersion suit is the latest outcome of VIKING’s “top to bottom review” of all equipment used in crew transportation, transfer and evacuation in the offshore wind sector. Its launch follows VIKING’s new all-on-one wind turbine evacuation kit, which includes the VIKING YouSafe™ Hightide suit with integral rescue harnesses, gloves and lowering device. The solution is robust enough to support an outside descent and has the built-in buoyancy for the user can stay in the water until rescuers arrive.