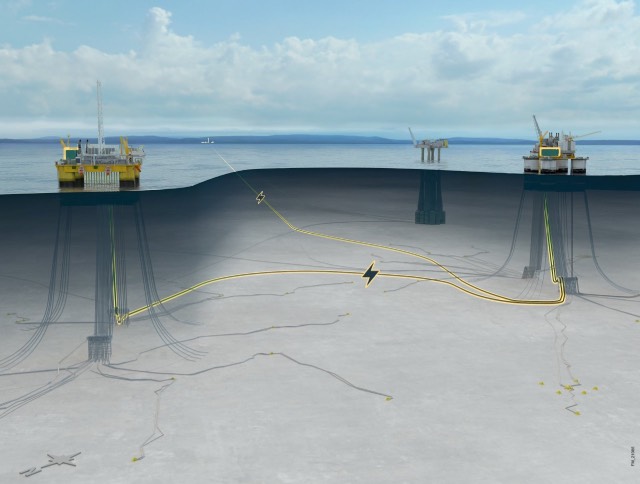 “Electrification is essential to successful reduction of the emissions from the NCS, and we have ambitious plans for this. The partnership’s decision to electrify Troll B and Troll C will cut emissions substantially. The Troll area will deliver enormous volumes of low-emission energy for many decades, adding great value for the companies and for Norway,” says Kjetil Hove, Equinor’s executive vice president for Development & Production Norway.

Capital expenditures total about NOK 7.9 billion. The project has been pledged a total of NOK 520 million in financial support from the Norwegian NOx fund.

“I am very pleased that we can realize Troll B and C electrification, a project that will help cut emissions on the NCS significantly. I am also pleased that we, in these challenging times, are able to sanction projects that help create great value for society and valuable activity for the suppliers. We expect that about 70 percent of the investments in this project will go to companies in Norway, says Arne Sigve Nylund, Equinor’s executive vice president for Technology, Projects & Drilling.

“The temporary changes to the petroleum tax regime adopted by Parliament as a result of Covid-19 have enabled us to implement several of the projects planned prior to the pandemic,” Nylund says.

Development solution
The subsea cable to the Troll B and C platforms will have a landfall at Kollsnes in Øygarden west of Bergen.  A high-voltage subsea cable will run from Kollsnes to Troll B, and one from Troll B to Troll C.

The Troll A platform, which came on stream in 1996, was the first electrified installation on the NCS.

Generating high activity and jobs in Norway
Troll West electrification project will require substantial deliveries of goods and services. This will generate value and jobs for Norwegian industry and the Norwegian society.

Aker Solutions has been awarded an engineering, procurement, construction and installation (EPCI) contract for modifications enabling the Troll B and C topsides to receive power from shore.  Worth around NOK 2.9 billion the contract will generate about 1000 man-years of work for the supplier during the project period. Engineering will be performed from Aker Solution’s Bergen office, and construction will take place at the Stord yard. The supplier estimates that a total of 4000 people will be involved in the work, including sub-contractors.

Skanska has been awarded a contract for the construction of a new transformer substation, cable trenches and landfall at Kollsnes. The contract is worth around NOK 390 million. The work will be headed by Skanska’s construction division in Bergen. The project is estimated to generate around 100 man-years of work for Skanska and sub-suppliers during the project period.

NKT has been awarded a contract for the production and installation of a high-voltage subsea cable from Kollsnes to Troll B and from Troll B to Troll C. The contract is worth about NOK 1 billion. Cable production will take place at their factory in Karlskrona, Sweden, and they will use their vessel NKT Victoria for the cable laying work.

Power concession
On 26 March 2021 the Ministry of Petroleum and Energy granted Equinor a concession to construct, own and operate the necessary electrical installations to supply the Troll B and Troll C platforms with power from shore.

The Troll field – a giant on the NCS
The Troll field is a giant in the North Sea, and the most prolific field on the NCS. The field has delivered, and will long continue to generate, enormous values for the Norwegian society. Historical revenues since 1995 total about NOK 1,650 billion, most of which has gone to the Norwegian state. Oil production at Troll is in the tail end phase, whereas only half of the gas resources have been produced.

The Troll field is operated from Equinor’s operations organisation at Sandsli in Bergen.