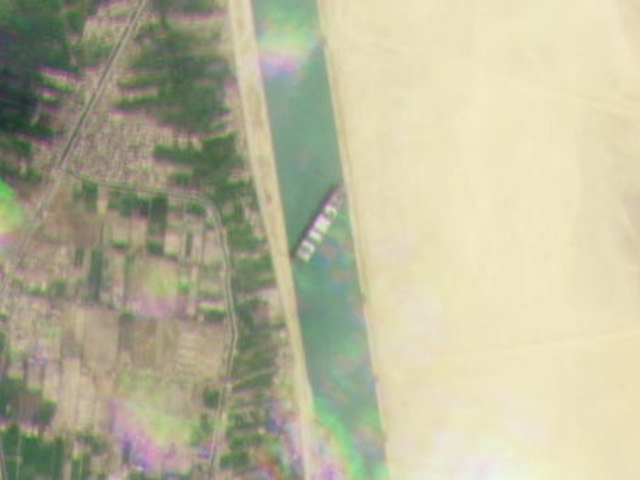 The overnight running aground of a mega container ship that has blocked maritime traffic on both sides of the Suez Canal is delaying ship movement and will disturb trade flows in the near term, several market sources told S&P Global Platts March 24.

The Suez Canal, located on Egypt, connects the Red Sea with the Mediterranean Sea and is a key waterway in international trade. Large volumes of consumer goods from China and South Asia to Europe, crude and refined products from Persian Gulf and India to Europe, naphtha from Europe to Asia and crude from the Persian Gulf to US Gulf cross the canal. Frenetic efforts are being made to refloat the 400-meter long, ultra large container ship, the Ever Given that ran aground shortly after entering the canal in the North bound convoy, a maritime agency handling shipments in the region told Platts from Egypt.

The Ever Given — which can carry 20,000 containers of twenty-foot equivalent unit, or TEU — was the fifth ship in the northbound convoy. Tugs are still trying to refloat it and there are 15 more ships behind it waiting for the traffic to resume.

Suez Canal is one of the world’s busiest waterways and even the slightest delay in traffic can result in congestion and disturb the delivery of goods and commodities on both sides of the Canal.

It is common for crude, refined products and consumer goods to be carried across the canal. US imports around half a million barrels of crude daily from Saudi Arabia alone — equivalent to around one Aframax cargo — a part of which goes via the Suez Canal.

As the bunker prices rose sharply last month, Suezmaxes and Aframaxes prefer to go via Suez Canal for America-bound voyages to cut down on travel duration and fuel consumption, a dirty tankers’ broker said. Bunker prices rose above the key psychological mark of $500/mt few weeks ago in major Asian ports, before registering a small correction.

It is not about the single aground ship alone but the entire trading schedule for millions of tons of commodities, market participants said.

According to cFlow, Platts trade-flow software, there are 14 dirty tankers transiting via the Suez Canal including three VLCCs, six Aframaxes and five Suezmaxes. Three of the Suezmaxes are identified as carrying the Basrah Light, Murban and Arab Light crude. Two VLCCs are bound for Ain Sukhna port in Egypt.

“If it takes time to resolve, the disruption will have an impact on the delivery schedules,” said a clean tankers’ broker. Aframax availability in the Mediterranean region can be adversely affected, a chartering source added.

Clean tankers moving from West Africa to Persian Gulf also use the services of the Suez Canal. However, many among them are currently opting to move to Europe.

Ships that have dropped anchor and are waiting for the traffic to clear, will still use small volumes bunkers, around 2-4 mt daily, which add to their costs.

There are another 27 ships that had arrived in the Suez anchorage area to transit, so it makes a total of 42 that are waiting to enter Suez Canal, provided the grounded containership refloats.

The turnaround of container ships is already hit due to several challenges such as those relating to crew changes and a lingering disruption in Suez Canal will delay further delivery of Asian goods into Europe, sources said. The Ever Given has so far travelled through Taipei and Malaysia, and was expected to arrive in the Netherlands in around a week from now, they said.

A slight tightening of supply of Panamax ships in the Black Sea region cannot be ruled out, a Panamax operator said. In Capesizes, the supply is already tight and loading of cargoes in Black Sea and North Atlantic region will be affected. The Capesize rates are already moving up due to tight supply on key routes.

However, a source with a Supramax owner said that the impact will not be huge if the entire salvaging operation is handled within 24 hours.

If the problem lingers for a longer duration, it can impact all segments of dry bulk carriers, as the accident has happened at a time when the time charter rates are already on the higher side.

How to salvage Ever Given

Since the container ship is just around 11 kilometers into the canal in the North-bound direction, it will either have to be taken back to Suez or forward into the Great Better Lakes region, said a maritime navigator tracking the development.

It is hazardous to repair the containership inside the canal lanes but after refloating the ship, it can only be moved at a slow speed of around two knots and therefore resuming normal traffic can take dozens of hours, the navigator said.

Since there is a distance of couple of miles between two ships in the lane, turning it around will be a challenge, he added.

There has not been any collision and since it is a containership, oil spill is not a possibility. Sources said in the worst case scenario, those controlling the cargo or ships may opt for force majeure.