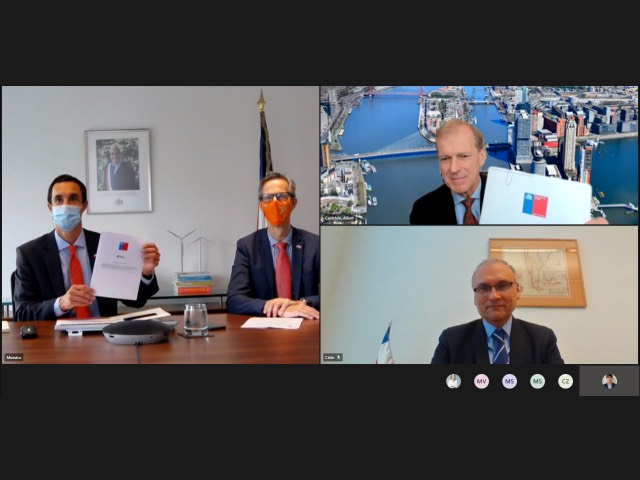 Minister Juan Carlos Jobet, of the Ministry of Energy of Chile, together with Allard Castelein, CEO of Europe’s largest port, signed a Memorandum of Understanding (MOU) on green hydrogen via videoconference. This is the first agreement on hydrogen as a fuel and feedstock signed by the Ministry of Energy with a European port. The agreement is considered to be of national importance in both the Netherlands and Chile. Present at the signing were the minister counsellor from the Chilean Embassy in the Netherlands, Mr Moscoso Valenzuela and the ambassador of the Netherlands in Chile, Mr Harman Idema.

Europe is currently working on a broad Green Deal programme to move its energy use and energy sourcing towards zero emission.

The minister highlighted that ‘this Memorandum of Understanding is an important step, since the Port of Rotterdam is an energy gateway port for Europe, with some 13% of the energy used in Europe reaching the continent via Rotterdam.’

The port is transforming to accommodate for the transition from fossil fuels to renewables and for its position as hydrogen hub for Nort West Europe. The port is currently preparing its infrastructure and distribution network to receive hydrogen per ship from all parts of the World and to ensure distribution of hydrogen to neighbouring countries in Europe. Port of Rotterdam looks at Chile, with its good conditions for renewables and its clear hydrogen vision and strategy, also its high levels of technology and its well-developed economy, as a very important country to partner with in the field of hydrogen.

The minister emphasized that the aim of the MOU is part of a plan to ensure the countries work together to pair international supply and demand for hydrogen. The aim is to collaborate in actions and initiatives to advance the use of hydrogen, sharing information, knowledge, good practices and experiences, formal discussions and collaborating on projects of mutual interest and benefit.

‘In Chile we have enormous comparative advantages in the production of green hydrogen, and that is what we address in our National Strategy: we want to produce the cheapest green hydrogen in the world by 2030 and be among the top three exporters by 2040’, explained Jobet.

Port of Rotterdam, with its large industrial zone, its deep waters and port efficiency, and its excellent distribution network to connect with major European Industrial zones, is an important hydrogen hub for global hydrogen trade and distribution into demand areas.

Allard Castelein, CEO of the largest Port of Europe, says: ‘We are committed to the Paris Climate agreement and have been working on the Energy Transition in our port for a number of years now. It is co-operations like these, with a country like Chile, that enable us to take important steps towards realising our ambitions as hydrogen hub for Nort West Europe. The economic and environmental importance of setting up this trade lane is significant as we believe hydrogen will be important for meeting the climate goals, and it will be beneficial both for the producing and the receiving country’.