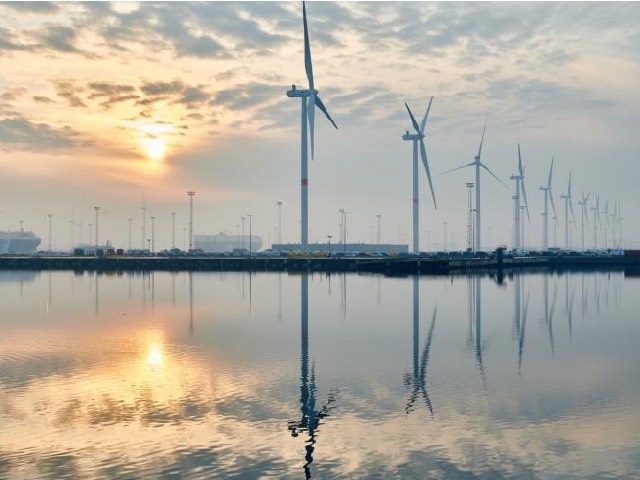 11 wind turbines, spinning in a row in the Port of Zeebrugge, do not only account for impressive images, but also for 44 MW of renewable energy delivered directly to International Car Operators (ICO), an important hub for roll-on/roll-off cargo with worldwide destinations. The largest industrial onshore wind farm in Flanders, a cooperation between ENGIE, Port of Zeebrugge, and ICO, is now operational after 18 months of intensive preparation and work. This is one important step for the local energy transition, but certainly not the last: the partners are currently exploring additional sustainable initiatives in the Port of Zeebrugge.

With its own wind farm consisting of 11 turbines, ICO is taking a huge step forward towards a carbon-neutral future, and deserves to be named a green terminal. The teams of ENGIE devoted themselves continuously to the preparation and construction works for a year and a half, in the occasionally difficult conditions that 2020 entailed. View the impressive images of the process here.

The wind turbines provide a total of 110 GWh of renewable energy per year, which corresponds to the consumption of about thirty thousand families, and keeps about fifty thousand tons of CO₂ out of the air each year. This local energy production is used, among other things, for 308 electric charging points that were also installed by ENGIE in 2019. The electric charging island, with a total capacity of 3.4 MW, can charge more than twenty thousand electric vehicles per week with green electricity. For this purpose, a ‘smart charging’ software, developed by research centre ENGIE Laborelec, is used. This software ‘communicates’ with the charging points and ensures that they load as efficiently as possible. Moreover, the charging points are in tune with the electricity production of the wind turbines and the supply to the electricity grid.

The 11 wind turbines and the ICO site also create opportunities regarding flexibility. At the ICO terminal, there is room for storage batteries that can store part of the local renewable energy capacity, and thus account for the intermittent nature of the wind turbines. ENGIE is currently analysing the possible solutions for this.

In the future, the 11 wind turbines will also be able to create ‘shore power’ or so-called ‘cold ironing’. This is a principle whereby ships are connected to the electricity grid when moored at the quay. This way, they can turn off their engines in the port, which is environmentally sustainable and prevents noise. Ships mooring at the Port of Zeebrugge in the near future would therefore be supplied directly with local wind energy while they are stationary at the quay. This project strengthens Zeebrugge’s position as a Clean Port and energy transition hub in Europe.

Philippe Van Troeye, CEO of ENGIE Benelux: “ENGIE, the largest renewable electricity producer in Belgium, has committed itself to playing a leading role in the transition to a carbon-neutral future, and has ambitious goals: by 2030, we want to increase our onshore wind energy capacity to 1000 MW. With these 11 wind turbines -which have a total capacity of 44 MW- at the ICO terminal, we are already getting one step closer to achieving that goal.”

Svein Steimler, Chairman ICO and ICO Windpark: “ICO does not only want to be the largest roll-on, roll-off terminal in the world, but also the greenest terminal through initiatives such as: the use of wind turbines, solar panels at the Vehicle Processing Centers, water recovery systems for the car wash (washing 500 cars with only 20 liters of rainwater), heat pumps for heating buildings, LED terminal lighting, EV shuttle cars and later shore power for ships.”

Marc Adriansens, Managing Director of ICO Zeebrugge: “The automotive sector is facing the most radical change in its existence. This way, sustainability will become the norm, and electrification will be further implemented in all car brands. As an important player in the sector, we want to be ready for the future and respond to this by installing this onshore wind farm.”

Tom Hautekiet, CEO of Port of Zeebrugge: “Port of Zeebrugge is actively working on the development of a Clean Port. In the context of sustainability and energy transition, we are ambitious for future projects. The size of ICO Windpark is therefore an important element in making operations in and around the port more sustainable.”