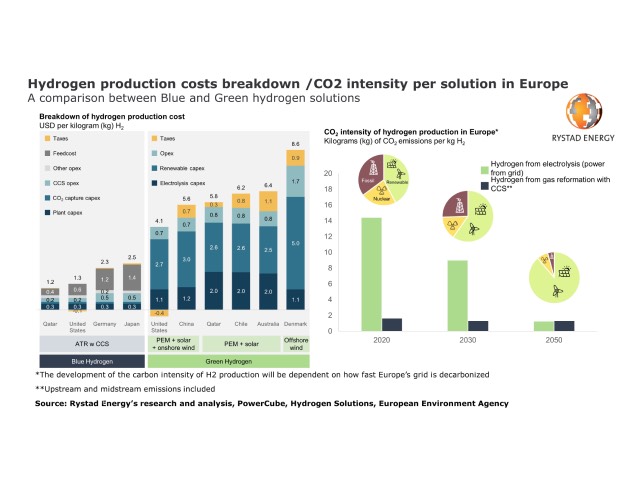 The energy world is changing, and quicker than most experts predicted only a year ago. The adaptation of renewable energy technologies is accelerating, even during the pandemic, and three contenders – carbon capture and storage (CCS), battery storage and hydrogen – have begun a competitive race to reduce emissions and assist the increasing number of countries, industries and companies that are setting net zero targets.

To address the energy transition and identify the latest trends, Rystad Energy has proudly initiated a monthly Energy Transition Report, which showcases and analyzes the latest developments across key transition variables, societies and technologies.

Below are some of the key findings of our third edition of the report, a 41-page analysis of our conceptual Hydrogen Society and its potential. A shortened public version of the report can be freely downloaded HERE.

The amount of CO2 emitted from the production of green hydrogen is dependent on the carbon intensity of the electricity used to power the process of electrolysis. Renewable generation powers the production of truly “green” hydrogen, while grid-connected electrolyzers will essentially have the same carbon footprint as the power mix of the grid from which it is powered.

Using electricity from the European grid in 2020, hydrogen produced via electrolysis would yield 14 kilograms (kg) of CO2 emissions per kg of hydrogen, as 35% of all electricity in Europe was produced by fossil fuels. By comparison, blue hydrogen produced from natural gas reformation is estimated to emit 1.7 kg CO2per kg hydrogen.

Towards 2030, it is expected that renewable energy will overtake significant market share from fossil fuels, with around 60% of all electricity in Europe produced from renewable methods such as wind, solar and hydro power. This is not sufficient to make green hydrogen production from the grid more environmentally friendly than blue; the production of green H2 will have a lower carbon footprint than blue H2 when the grid reaches 90% carbon-free power generation.

Although fuel-cell electric vehicles (FCEVs) are already commercially available as passenger vehicles, battery electric vehicles (BEVs) have quickly gained market dominance and have established significant infrastructural support in the form of widespread charging station availability and robust manufacturing streams. This stands in contrast to the relatively limited H2 infrastructure in the vast majority of regions, making H2 refueling a challenge.

Additionally, the advantages gained by using a hydrogen fuel cell – somewhat lighter drivetrain and longer range – diminish for every incremental improvement in battery electric technology. This, combined with low consumer demand, points to BEVs likely being the decarbonizing technology of choice for light-duty transportation. However, FCEVs may be able to establish market share in some niche markets or geographies, as some countries still push policies dedicated to FCEVs.

Hydrogen fuel cell technology in road freight is less mature than for passenger vehicles but offers some advantages. Although H2 tanks require more space than do equivalent batteries for heavy duty vehicles, fuel cells and tanks are generally lighter than traditional batteries, equating to more capacity for payload. This advantage increases with range; very long-range FCEV trucks weigh significantly less than BEV’s, although still more than shorter range vehicles of either type. This advantage is at risk as electric battery hardware itself becomes increasingly lightweight, and increasingly long range, with technological improvements.

The cost competitiveness and decarbonization potential of FCEVs will depend on how hydrogen is sourced. H2 from electrolysis offers the greatest carbon savings, but hinges on cheap and plentiful electricity from renewable generation. This is largely subject to regional constraints, and therefore the carbon intensity and availability of H2 faces real geographical risks. Given this, the costs associated with building sufficient hydrogen infrastructure to support regional road freight will vary. Battery electric semitrucks are already relatively cost-competitive compared to their FCEV counterparts, making BEV trucks the likely choice for road freight in most geographies.

Refineries comprise a significant share of current hydrogen demand. The majority of H2 production today is captive within refineries, meaning it is both produced and consumed within the refining process. Hydrogen in refineries is primarily produced via natural gas pathways (such as steam methane reforming, SMR) and is consumed within the process of synthesizing fossil fuel products.

If coal and natural gas are to be phased out of the H2 supply that feeds these processes, then green H2 will have to increase sufficiently to cover a significant share of current production capacity. This could mean that refineries invest in the new infrastructure required to electrolyze green H2, or it could mean that refineries turn to suppliers for cheaper hydrogen supply.

However, as demand for oil products declines, so too will the demand for H2 within refineries; we estimate H2 demand from refineries will fall from around 40 million tonnes (Mt) in 2025, to well under 10 Mt by 2050. Perhaps the most attractive decarbonization alternative may be to outfit refineries with carbon capture and storage mechanisms, rather than invest in new H2 infrastructure.

Hydrogen demand in Europe, North America and Asia lies at largely similar levels today, but growth in Asia is expected to outpace all other regions by a large margin within our Hydrogen Society model, with Asia expected to account for 47% of global demand by 2050. Growth in Europe is forecast to be slightly higher than in North America, but North America will still remain the second largest hydrogen market in 2050 at 63 million tonnes (Mt), up from 16 million in 2020.

These numbers compare to up to 160 Mt in 2050 for Asia, up from 26 Mt in 2020, and 48 Mt in 2050 for Europe, up from 11 Mt in 2020. This growth is considerable, especially when accounting for the fact that growth will come from decarbonization efforts, meaning that all new production needs to be net-zero, or close to it, for the increased consumption of hydrogen to make sense.

For green hydrogen production, the capex associated with renewable power generation constitutes the largest share of cost. This could be replaced with grid electricity, but that would increase the project risk as the project’s economics would then be dependent on prevailing electricity prices. Furthermore, it would not ensure green electricity at all times, as power would inevitably be intermittently supplied from fossil sources.

The capex and opex of electrolysis are the second largest cost items, both of which are expected to fall over the next decade as the technology scales. Despite this, Rystad Energy expects green hydrogen project costs will substantially decline over the coming decade, making green hydrogen more competitive against blue hydrogen by 2030.

In a society where hydrogen takes center stage and demand reaches its full 340 Mtpa potential by 2050, supply will need to rocket, but the production of this much hydrogen will be no small feat. Should demand be met with purely blue hydrogen, it will require 148 billion cubic feet of natural gas per day (Bcfd) in 2050, around one third of global gas production today. On the other hand, should this hydrogen need be met by purely green hydrogen, the necessary electrolysis would require 18,000 terawatt hours (TWh) of electricity – roughly equal to 75% of all current power production.

This latter point is important as it highlights not only the vast amount of green electricity needed, but also the fact that blue hydrogen has a major role to play. As a result, it is evident that regardless of cheap renewable generation, the scale of the task at hand is so large that blue hydrogen would definitely need to play a big role in realizing a hydrogen society.