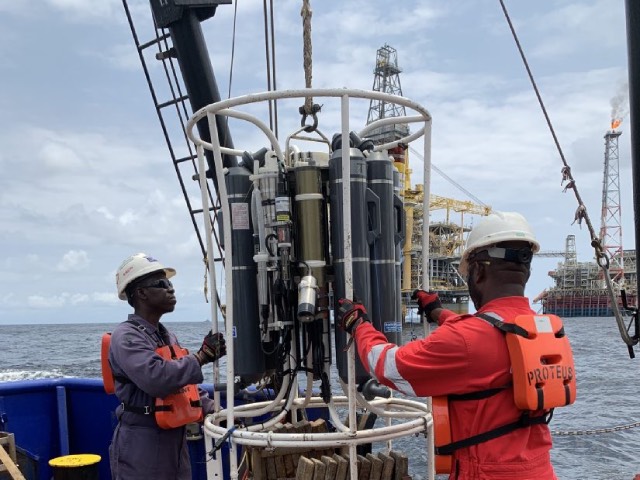 TDI-Brooks International, Inc. has recently completed Environmental Baseline Studies (EBS) for both Cabinda Gulf Oil Company Limited (CAGBOC) for the Republic of Angola and ExxonMobil. TDI- Brooks safely and efficiently deployed the R/V Proteus to blocks 0 and 14 for CAGBOC and Block 15 for ExxonMobil offshore Angola to complete these programs.

For more information on our Marine Environmental Services visit HERE 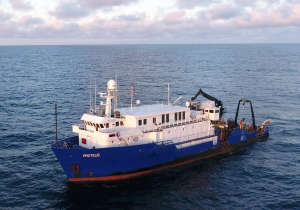 The TDI-Brooks vessel earmarked for this project was the R/V Proteus, a multi-use vessel suited for a wide variety of oceanographic research duties. The Proteus is outfitted with TDI-Brooks’ complete geotechnical tool kit including 20-m JPCs and 40-m CPT-Stinger/Samplers along with other TDI- Brooks standard SGE, HF, survey, EBS, cable route, etc. services. The Proteus has a Kongsberg EM-710 (1×1) hull-mounted MBES for surveys to ~2,500m water depth.

The Proteus is also equipped with satellite communications (voice, fax, and email), differential GPS, geophysical survey gear and large a-frames with high-speed winches for coring or geotechnical work. The Proteus is in ABS class and had an extensive technical refit in 2009 and 2014 making her suitable for extended voyages. Her current configuration allows up to 25 Guests /Scientists and 10 Crew. For more specifications on the R/V Proteus visit HERE

TDI-Brooks provides laboratory analysis on sediment and water samples via their state-of-the-art laboratory facility in College Station, Texas. The environmental, geochemical, and geotechnical laboratories provide high-quality analytical services and scientific interpretation. All 3 laboratories are staffed with highly skilled scientists and chemists who have worked in partnership with federal and state agencies as well as the private energy and environmental industry for over 25 years.