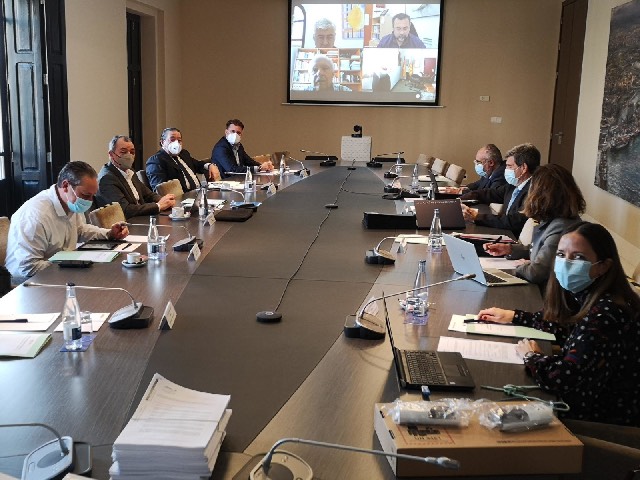 Export container traffic has now been on the rise for six consecutive months, with an average growth rate of 11%.

The most recent data – corresponding to the month of February – corroborate the commercial strength of Valenciaport with increases of 8.19% in TEUs, especially those destined for export which increased by 20.83%.

The president of the Port Authority of Valencia (PAV) stresses that “in 2021, the positive trend started in the second half of last year will continue, thanks to the export activity of the companies”.

Valenciaport closed 2020 as the leading Spanish port in the number of containers handled, in freight traffic on the motorways of the sea (ro-ro cargo) and in car trade, according to data from the Port Authority of Valencia (PAV) and Puertos del Estado (State Ports). The triple leadership reflects the export activity of the Valencian Community and Spain concentrated in the port of Valencia in the second half of 2020, and which continues in the beginning of 2021.

Valenciaport ended last year with similar figures to 2019, both in the number of containers (5.4 million) and by goods calculated in tonnes and operated from the docks (more than 80 million). Despite the uncertainty of international trade conditioned by the Covid-19 health emergency, with consecutive weeks in which the activity of companies was practically paralysed, the pull of exports in the last months of the year has meant that since August the activity of the port community has registered double-digit positive figures. Moreover, this dynamism, especially of the products produced in Spain destined abroad, has been key to reaching the milestone of exceeding 500,000 TEUs for the first time in the history of Valenciaport, specifically, 508,177 in October and 503,482 in August.

Thus, with the 2020 data of the Spanish ports of Puertos del Estado, it is confirmed that Valenciaport led the total number of containers with a figure of more than 5.4 million, representing 1 out of every 3 containers mobilised in Spanish ports. In terms of tonnes of goods distributed, it occupied second place behind Algeciras.

In ro-ro traffic, trade in goods by ship which is loaded and unloaded with its own wheels, the ports managed by the APV handled 11.22 million tonnes of goods, i.e. 20% of the total goods using the motorways of the sea of the Spanish port system.

The year begins with an upward trend, in spite of the pandemic

According to the final data of the PAV statistical bulletin corresponding to January, this positive trend is maintained in a month which continues to be marked by the restrictions on economic activity in many sectors due to the pandemic, something which did not occur in January 2020. Thus, Valenciaport has registered a total of 6,721,984 tonnes of goods and 465,656 containers handled at the Valencian docks, which represents an increase of 8.08% and 4.03%, respectively. Of the TEUs handled, full TEUs grew by 3.67% and of these, cargo TEUs were once again the most dynamic with an increase of 12.47%, while unloading TEUs (imports) fell by 2.85% and transit TEUs increased by 3.04%.

In this first month of the year, the total traffic of ro-ro goods was 897,007 tonnes with a decrease of 1% compared to January 2020. Valenciaport also mobilised this month a total of 40,750 units of automobiles in cargo regime, a 9.31% less.

“Valenciaport is an infrastructure at the service of our hinterland. We act as a platform for the export of the productive fabric, an essential component of the dynamism of the Spanish economy, which since August last year has shown a very enterprising productive capacity which is demonstrated by the increase in the number of cargo containers (exports) at the Port of Valencia. This has allowed us to end the 2020 financial year, marked by Covid-19, with similar figures to the previous year, leading the Spanish port market in containers, ro-ro traffic or vehicles, and starting 2021 with very positive figures”, explained the president of the PAV, Aurelio Martínez, who today presented a balance of the main 2020 figures to the Board of Directors.

“Valenciaport – explained Martínez – is an eminently commercial port that channels almost 40% of the maritime export/import traffic in Spain. We are a gateway for the entry and exit of goods with practically all the countries in the world; a logistical enclave and a driving force for commercial activity where the main shipping companies (more than 35) operate, managing more than a hundred regular lines. A tool of the first magnitude for the competitiveness of companies in a globalised economy”.

During his speech, the president of the APV insisted that “Valenciaport’s good performance is thanks to the export sector, which has been the key to activity in the last months of 2020 and at the beginning of this year”. Thus, between August and December, cargo containers (export) grew by an average of 11%, while in January of this year the percentage rose to 12.47%, and in the first fortnight of February the growth compared to the same period last year was 20.83%, experiencing record highs in year-on-year terms. In this regard, it is worth highlighting the importance of the data for the beginning of this year (January – first fortnight of February), as these increases occur during a pandemic, with restrictions on activity in many sectors, compared to the same period in 2020 when Covid-19 was not yet present. 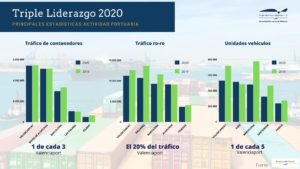