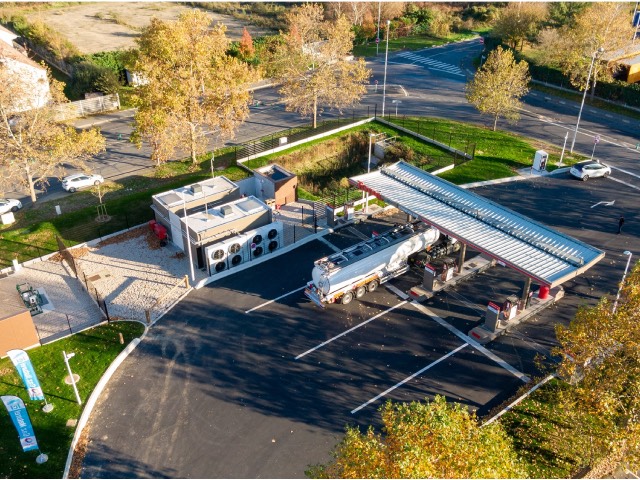 Total has inaugurated France’s largest filling station exclusively dedicated to Natural Gas for Vehicle (NGV) and bioNGV, with the onsite presence of Jean- Baptiste Djebbari, French Minister Delegate for Transport. Located at the heart of the logistics platform of Gennevilliers, the second largest fluvial port in Europe, this station is now open 24/7 to professionals (B2B) and B2C customers. It will be operated by Total for the next 10 years.

This concession has been attributed to Total by Sigeif Mobilités (a semi-public company founded by Sigeif and the Caisse des Dépôts) through a tender. It will support the development of new mobilities in the Île-de-France region and will become a strategic location for NGV and bioNGV supply for the Grand Paris area (which includes the City of Paris & its 130 surrounding cities) and beyond.

This Total-branded station will distribute NGV as Compressed Natural Gas (CNG) and will be supplied to the site by GRTgaz, for the first time in France through its high-pressure gas delivery network. The station will be able to distribute up to 100% of bioNGV, as users have the possibility to choose and adjust -directly at the pump and contractually for B2B customers- between several rates of biomethane incorporation.

“This opening of France largest NGV and bioNGV filling station is a source of pride for our teams” indicates Guillaume Larroque, President of Total Marketing France. “Our ambition is clear: to become a leader in NGV and bioNGV distribution in Europe, with 450 Total-operated stations by 2025 including 110 in France. This station is also a model for our future developments in Europe where Total is committed to achieve carbon neutrality by 2050 or sooner, for the products used by our customers. Our objective of a 50% rate of biomethane incorporation will directly contribute to it.”

Jean-Jacques Guillet, President of Sem Sigeif Mobilités, rejoices about the launch of this station, a new brick in the network of NGV/bioNGV filling stations that Sigeif initiated and started back in 2014. “This station within the Port of Gennevilliers is an essential infrastructure, fitting into the ongoing plan to improve air quality in the Île-de-France region. The companies located at the Port have now the possibility to use a clean fuel for their urban deliveries in Paris and its western neighboring cities, all to be covered by a Low-emission Zone currently under implementation.”

Jean-Baptiste Djebbari, Minister Delegate for Transport, declares: “I salute the opening of France’s largest NGV and bioNGV filling station for trucks. Companies dedicated to the transportation by road of goods and people are in constant search for alternatives solutions to diesel for their own energy mix. Beyond the steep reduction in CO2 emissions, the advantage of NGV and bioNGV technologies is their immediate availability, widespread among all segments. We have renewed the support policies for these vehicles until end-2024, in order to provide companies with visibility and to allow them to engage in this transition.”

for the protection of the environment and for climate. I am proud that Ile-de-France Region has made it one of its priorities and has contribute to the creation of the Total – Sigeif Mobilités filling station at the port of Gennevilliers, the largest ever built in France. Its connection to the gas network and its proximity both to its customers in the logistics business and to the future bio-waste methanization unit -that we support- makes it an exemplary case of circular economy. The Regional Government accelerate the development of NGV and bioNGV usage for trucks and utility vehicles in Île-de-France, through its participation in the Sem Sigeif Mobilités, but also through an ambitious policy of subsidies to support the acquisition of NGV- compatible vehicles by small and medium companies. Nevertheless, the Region also leads by example with the energy transition of the Île-de-France Mobilités buses fleet.”

The development of this station and its opening to the general public already using NGV will complete the existing Total network in France and allow a growing number of transportation and logistics professionals of the Greater Paris area to convert to GNV in optimized conditions. Total will therefore assist them to switch their fleets of vehicles (heavy duty trucks, buses, garbage trucks, utility vehicles…) to NGV and bioNGV.