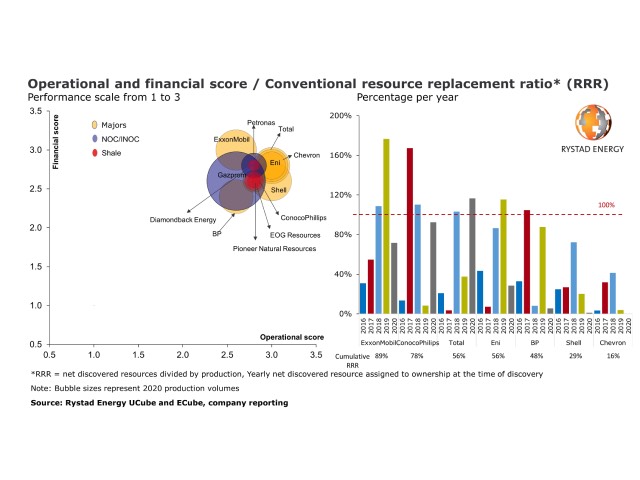 Despite the devastating downturn of 2020, most global majors held up quite well during the market turmoil, a Rystad Energy comparative analysis reveals after measuring key upstream performance metrics. Total outshined all other peers, as the French company not only exceled in financial and operational performance, but also was the only major to replace all of the year’s produced resources.

Total has been able to keep its operating cost per barrel of oil equivalent (boe) consistently below $5 in the past five years. Although it is not the leader among majors in this metric (BP is), Total is the major that achieved the strongest year-on-year cost reduction per boe in 2020 among peers whose costs were already in the below-$5 range. Rystad Energy estimates Total’s operating cost reduction at around 8.5%.

The company has also enjoyed good cash flow in the past couple of years, and together with Chevron, Total stands out for bringing down its investment ratio by more than 60% in 2020 compared to 2015. Both companies had 2020 investment ratios calculated to around 49%, a remarkable cash conservation improvement compared to the past.

Last but not least, in a year of poor overall exploration success for majors, Total pocketed close to 1 billion boe of newfound volumes last year, with 70% of these within Suriname’s Block 58 where the company acquired a 50% stake from Apache in December 2019. Total took over as operator of the block earlier this month after the fourth exploration well was completed – with yet another discovery at the Keskesi East-1 prospect.

As a result, Total’s exploration success has had a significant impact on the company’s resource replacement ratio (RRR). Total was the only company to replace more than what it produced last year with a replacement ratio of 116%, followed by ConocoPhillips on 93% and ExxonMobil on 72%.

For example, Rystad Energy estimates that Chevron’s operating cost per boe was reduced by almost 15% year-on-year, an impressive step, but the company had a disappointing exploration season. Shell saw costs per boe declining by about 10%, but its exploration results were also weak.

All the companies in our peer group spent their cash judiciously last year and invested far less of what they earned compared to 2015. This strategy has helped them emerge from 2020 in a less vulnerable state than after the downturn of 2014–2016. Compared to Total and Chevron, however, peers such as ExxonMobil and BP still invested a relatively high share of their cash flow last year at 79% and 90%, respectively.

A rapid drop in investment ratio indicates an efficient investment strategy that concentrates spending to profitable and high-ranked projects, enabling companies to quickly limit or relinquish investments in less profitable or non-core assets.

In our operating performance scorecard, on a scale of 1 to 3, Total got the highest score (3) together with Eni, Chevron and Shell. Total, Eni, Chevron and others also score a high 2.8 in financial performance, though they are all beaten by ExxonMobil which scores 3 in this category. All in all, several of the majors are among the upstream companies with the lowest risk associated with the current oil prices.

Total had announced an aggressive exploration campaign for 2020, but industry budget cuts and Covid-19-related delays have pushed most of the key wells with significant pre-drill volumes into 2021. Nonetheless the company’s well-timed investment in Suriname hit the jackpot and propelled Total to the top of the podium among its peers in terms of net cumulative discovered resources for 2020, halting ExxonMobil’s dominance in recent years.

The recent discoveries have also helped the French company climb to third place in terms of five-year RRR with 56% for the years 2016 to 2020, up from 34% for the 2015 to 2019 period. ExxonMobil still leads this metric with 89% thanks to its discoveries off Guyana, while ConocoPhillips follows with an RRR of 78% for the past five years, boosted by the Willow and Narwhal discoveries in Alaska.

Total’s reserve replacement performance stands out even more when we consider that the company has enjoyed a significant uptick in production volumes since 2014, generating an average annual increase of about 5% to 8% since 2016. In 2019 the company recorded 3 million barrels of oil equivalent (boe) per day of hydrocarbon production including non-sales gas, to which it planned to add another 4% to 5% in 2020 pre-Covid-19.

The final figure for 2020 is instead expected to show a small decline to about 2.9 million boepd due to the company’s strict adherence to the OPEC+ implemented quotas and some other reasons such as the lack of production from Libya until October 2020. This is still a decent increase of 5% over 2018 production volumes.

“The overall resilience of the majors will give them a solid basis for the coming energy transition as many of the companies are now rapidly expanding into low-carbon segments such as wind and solar power,“ says Palzor Shenga, vice president at Rystad Energy’s upstream team.

The ongoing shift towards renewables means that the global upstream majors in the future will have to be measured along more dimensions than purely oil and gas to accurately gauge and compare their performance. Rystad Energy will keep developing tools and analyses to keep track of the industry as it changes.