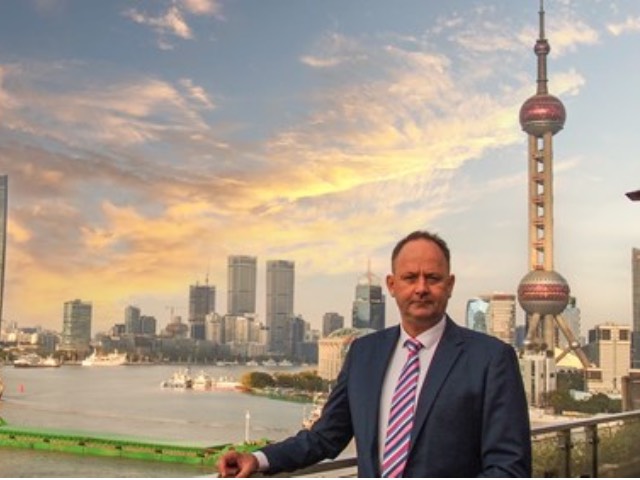 The Isle of Man Ship Registry (IOMSR) has appointed its first permanent representative in China.

Well-known naval architect, experienced newbuilding project manager and Mandarin speaker Jonathan Kingdon has taken up the post from his base in Shanghai where he also heads up the Asia operation of IDWAL, a market-leading marine inspection and project management firm. He will join the Isle of Man Ship Registry’s network of overseas representatives in Greece, Japan and Singapore.

Isle of Man Ship Registry director Cameron Mitchell said China is a key market for the flag state with many of its clients drydocking and building ships in China. He said in total two thirds of the IOMSR fleet is now managed from Asia.

“We are delighted to appoint someone of Jonathan’s experience and expertise to strengthen our presence in China,” he said. “As well as helping with inspections on the ground Jonathan will also be raising awareness of all the key and value-added benefits of the Isle of Man flag with Chinese shipyards, shipowners, operators and finance houses. As one of the world’s biggest maritime nations, China has a huge and exciting market potential for the Isle of Man Ship Registry and is a favoured destination for building quality ships for many of our European shipping clients. Notably tanker and bulk carrier owners and operators from Greece. In addition, we expect to be working more closely with the China Classification Society (CCS) which is seeing massive growth, both in numbers and quality and diversity within its fleet. We expect to work more with CCS and we are interested to share expertise with them in green technology, LNG, LPG, non-carbon based fuel powered ships and intelligent ships, areas where CCS is undertaking extensive R & D.”

Jonathan Kingdon said the registry would be offering its services to the full range of merchant and offshore ships and commercial yachts in the International Chinese shipping market. He said a key message he will be taking to the Chinese market is the Isle of Man Ship Registry’s ability to offer indefinite ‘favoured nation status’ to Chinese ship-owners offering preferential Tonnage Dues which equates to a 28% saving (Newcastlemax ~USD90k/year).

“I am really pleased to join the Isle of Man team and build the profile of such a well-respected flag here in China,” he said. “The registry can offer Chinese clients an easy, efficient and competitive service. This includes low fees with one annual payment and no stealth charges whereas some open registries charge for almost all additional services. At the Isle of Man Ship Registry there is no annual tonnage tax based on size of ship, no inspection fee, no consular fee, no casualty investigation fees and we offer a discount for multi ship fleets as well as fee incentives for environmentally friendly ships.

“Critically we also offer a robust but pragmatic regulatory framework which only applies the requirements of the International conventions, rules and regulations to make the construction process as straight forward as possible for Chinese shipyards – this means that the Isle of Man new ship build standards are exactly the same as Panama, Liberia and the Marshal Islands. Digitally we are also evolving, we were one of the first flag states to offer digital certificates, we undertook the first ever remote periodical survey of a Bulk Carrier with DNV GL and used this knowledge and expertise to implement remote flag state inspections. Furthermore, we are about to launch the industry’s first seafarer welfare app to support seafarers’ mental health which we know is a huge concern to ship owners.”