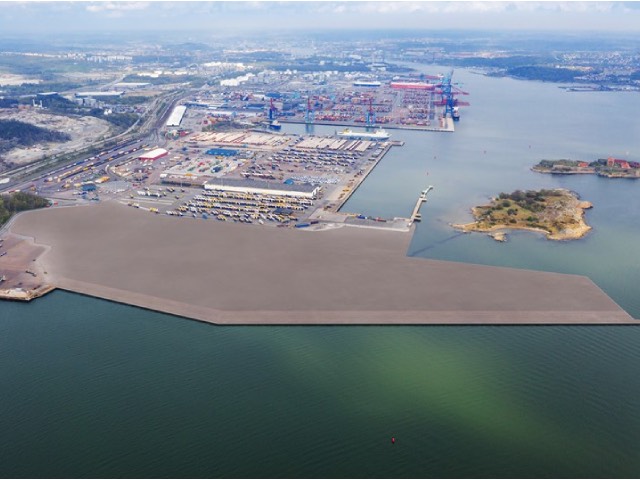 The largest port expansion in Gothenburg since the 1970s is underway at the Port of Gothenburg. The terminal will be 140,000 square meters in size (equivalent to approximately 20 football pitches) and will be directly adjacent to other major terminals at the port.

“The terminal is a crucial aspect of the port’s long-term expansion plans and will further strengthen Gothenburg as the Nordic logistics capital. By almost exclusively using recycled material in the project, we are also able to expand with environmental consideration” said Joakim Grenmarker, Project Manager at the Gothenburg Port Authority.

Construction of the brand-new terminal at the Port of Gothenburg got under way in autumn 2018. Since then, 1,500 piles have been sinked into the bedrock, and the Arendal bay has been embanked with blasting stones from an adjacent hill.

When the material fills the basin, water is forced out and needs to be purified and checked before it is returned to the sea.

“This is done by adding carbon dioxide to the water from the backfill basin, which lowers the PH value so that pollutants can precipitate. The water is then pumped on to a sedimentation basin and on to a sand and active carbon filter. We examine and send water for analysis once a week to ensure that the water is ready to be pumped into the sea,” said Kristina Bernstén, Environmental Engineer at the Gothenburg Port Authority.

The terminal is expected to be completed by 2023, although certain sections might be brought into use before then.

More on the project (English subtitles): 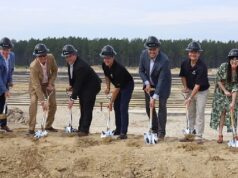 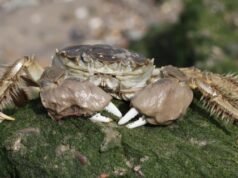