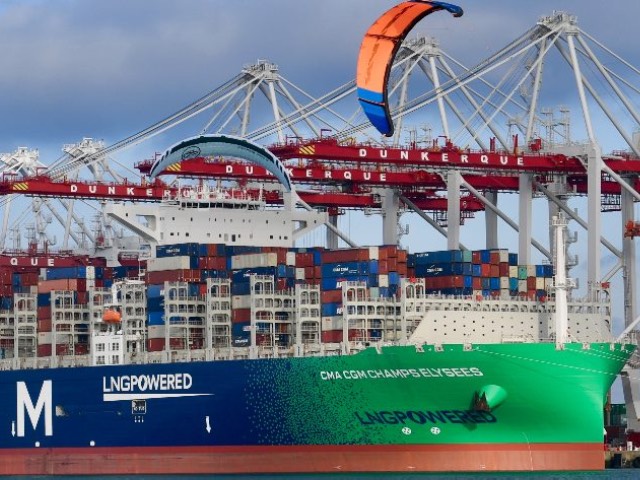 The CMA CGM CHAMPS ELYSEES, sailing under the French flag, has called today at Terminal des Flandres at the Grand Port Maritime of Dunkirk, the first call in France by a 23,000 TEU vessel powered by Liquefied Natural Gas (LNG). She joins forces with the CMA CGM JACQUES SAADE, the CMA CGM Group’s flagship, on the French Asia Line (FAL 1), the iconic route linking Asia with Europe, with a weekly call in Dunkirk.

LNG, a visionary decision to preserve air quality and an energy source with a bright future

In November 2017, Rodolphe Saadé, Chairman and CEO of the CMA CGM Group, made the visionary decision to order nine 23,000 TEUs with an LNG power supply, a first in the history of the shipping industry for vessels of this size.

LNG is currently the state-of-the-art industry solution for preserving air quality. It delivers a reduction of 99% in sulfur dioxide, 91% in particulate matter emissions and 92% in nitrogen oxide emissions, surpassing the requirements of current regulations. LNG also provides an initial response to the challenge of tackling climate change. An LNG-powered vessel emits up to 20% less CO2 than fuel-powered systems. This technology is one of the initial ways in which the CMA CGM Group plans to meet its target of being carbon-neutral by 2050.

The weekly FAL 1 call in Dunkirk will keep France supplied with goods ahead of the festive season. CMA CGM also helps to export French and European products around the world. The French Asia Line’s weekly call in Dunkirk is a means of exporting high value-added goods, such as industrial equipment, as well as French agricultural products.

The CMA CGM Group now operates seven LNG-powered containerships sailing under the French flag and will have a fleet of 26 containerships of various sizes by 2022 (see appendix for list and details).

The CMA CGM CHAMPS ELYSEES and her eight 23,000 TEU sister ships (including the CMA CGM JACQUES SAADE) will be registered on the French International Register (RIF). They will be named after iconic monuments and landmarks in the French capital (Palais Royal, Louvre, Rivoli, Montmartre, Concorde, Trocadéro and Sorbonne).

Get a behind-the-scenes look at the construction of the world’s largest LNG-powered containership – from the first sketches through to launch! It’s been a tremendous story of human and industrial endeavor.

Tuesday, December 8 at 9:05pm on the RMC Découverte channel.