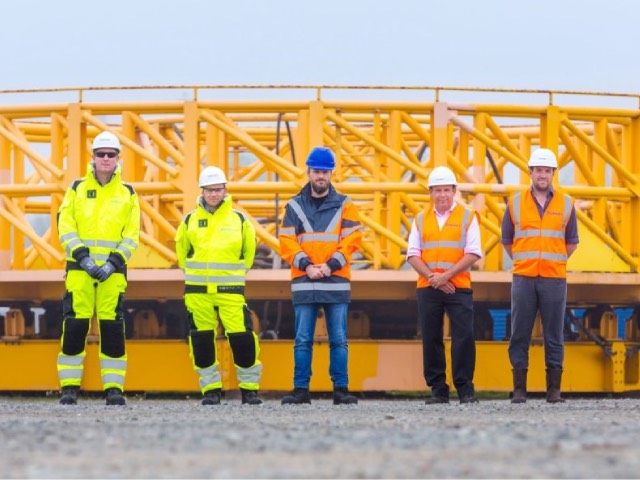 THE OSPREY GROUP HAS CHOSEN LOCAL CONTRACTORS TO HELP SUPPORT ITS CONTRACT FOR THE HANDLING AND STORAGE OF SPARE EXPORT CABLE FOR THE MORAY EAST WINDFARM.

When a windfarm needs to store spare parts, it cannot simply put them into a nearby warehouse – the right kind of secure storage has to be used onshore. However, those parts still need to be accessible so that operating schedules can be maintained. This means storing them in a known environment, to ensure their integrity, with the facilities to ship them out at short notice.

The Osprey Group has signed a contract to receive and store approximately 2,500m of submarine cable and approximately 1,500m of HDD cable, being used by Moray East Windfarm. The cables will be received from the NKT’s cable laying vessel MV NKT Victoria in Q4 2020: a powered quadrant and Osprey’s Self-Propelled Modular Transporters will be used to load the cable into the basket at the Port of Sunderland, where it will be stored for at least two years.

“These cabling baskets are a specialist item, we get them built to our own design. For this contract, we’ve been working with fabricators JW Colpitts, and the Port of Sunderland. It’s rewarding to know that we can be successful in being awarded work in the renewables market partnering with local businesses and offering local content skills.”

Osprey is very supportive for Rt Hon Alok Sharma MP department’s ambition for the Offshore Wind Sector Deal, and the building of a stronger UK supply chain through the Offshore Wind Growth Partnership (OWGP), with the support of the Parliament Select Committee for Business, Energy and Industrial Strategy chaired by the Rt Hon Darren Jones MP.