Cyprus Shipping News
Home World The UK could increase its ambitions for renewable energy at a lower... 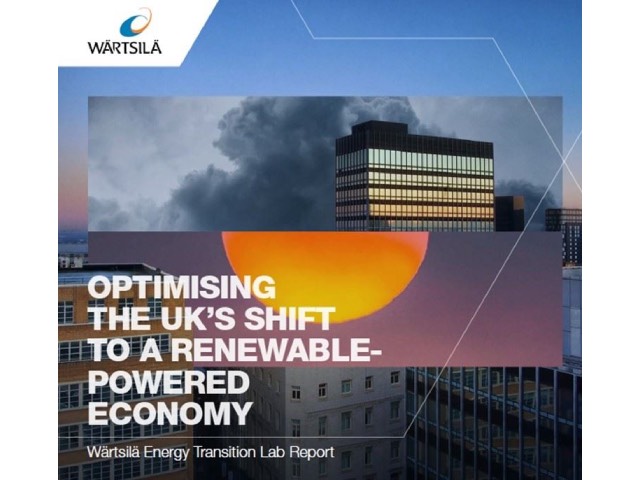 Wärtsilä, the global technology company, is today launching new analysis showing that investment in flexible energy technologies, such as battery energy storage and advanced flexible gas, can rapidly increase the share of renewable generation in the UK by 2030 at a lower overall cost to consumers.

The Energy Transition Lab Report: Optimising the UK’s shift to a renewable-powered economy models the impact of current UK ambitions for renewable energy and shows that adding 7GW flexibility to the UK power system by 2030 can deliver a higher share of renewable generation (62%) than could be possible by adding wind and solar without flexibility.

This flexible scenario could power more than 710,000 more households with renewable energy, cut 2 million tonnes of CO2 emissions and cost the UK GBP 270 million less every year by 2030.

It could also save the UK economy GPB 660 million a year when compared with installing another new nuclear plant alongside renewable generation. This is due to the high upfront costs and substantial market interventions required for more nuclear.

Ville Rimali, Growth and Development Director, Wärtsilä Energy, said: “This report confirms that flexibility can accelerate the transition to renewable energy. Our analysis is based on the current energy system and conservative assumptions about the future. We know significant developments in electrification are coming, so we are calling on Europe to be ambitious and drive towards 80% renewable generation by 2030.The UK is at a fork in the road – it can either make decisions that will maintain the current pace of decarbonisation or accelerate a faster green transition and reap the rewards.”

The analysis models three scenarios based on the current UK electricity system, energy policy, government pledges on renewable energy growth and predicted growth in renewable generation capacity, to help pin-point the immediate actions the UK can take to accelerate the most cost-effective shift to renewable energy by 2030.

The scenarios model: 1) achieving 40GW of offshore wind by 2030, as pledged by Boris Johnson, together with an anticipated 7GW of new onshore wind and 20GW of solar; 2) adding the same new renewable generation capacity plus 3GW of new nuclear; 3) an alternative scenario with significant new flexibility (7GW) to enable more new renewables (72GW total wind and solar) without increasing costs compared to adding renewables only.

Jyrki Leino, Senior Manager, Business Development, Wärtsilä Energy, said: “Covid-19 has provided a rare opportunity to realign our priorities. The UK must ensure it is making the right choices today to enable long-term decarbonisation. Rather than firefighting in response to stresses on the grid, the UK should now look to invest to solve the issues permanently. The government and industry must focus support and investment on the most effective pathway to achieving net zero.”

The IEA, UK Energy Systems Catapult and Renewable UK have all recently presented the need for more investment in flexibility on UK networks in order to increase renewable energy.

The Wärtsilä Energy Transition Lab Report makes it clear that installing new flexibility alongside renewable generation by 2030 can deliver more wind and solar power at no additional cost to consumers – indeed it could be cheaper overall. Investment in flexibility also has significant long-term benefits, future-proofing the UK electricity system and supporting an accelerated cost-efficient transition towards 100% renewable power and wider economic decarbonisation by 2050.

“The government will soon release its energy white paper, detailing its strategy for the coming decade and beyond. This is an opportunity to set an ambitious target for renewable energy to become the primary source of power by the end of the decade,” added Ville Rimali.