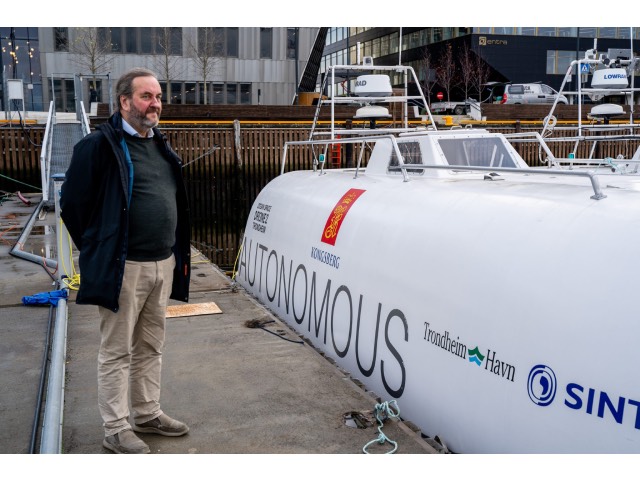 Technology, fuel prices, and the need for green transportation. These are some of the reasons why Ørnulf Jan Rødseth, senior researcher scientist at SINTEF Ocean, believes that it is not long till we see unmanned ships carrying goods.

– It’s difficult to say what the future will bring. It is already happening quite a lot, and we probably do not see the consequences of everything yet, says Rødseth.

He works at the department of energy and transport at SINTEF Ocean. He is also the leader of the Norwegian Forum for Autonomous Ships.

Climate change pushes us to find new solutions. The shipping industry is no exception.

– The transition to new fuel will take place in the next 15-30 years, and that means dramatic changes in shipping, says Rødseth.

– I think we are going into an age where energy will become much more expensive, and that will have many consequences. The consequences will be at an individual level, but first and foremost for how the business models will develop. This in turn will have an impact on transport, says Rødseth.

In all sectors researcher are looking for alternatives to fossil fuels. But one of the challenges with the transition to more climate-neutral fuel, is the price.

– We are talking about fuel that may be two to six times more expensive per kWh than it is today, says Rødseth.

But price is only one of the challenges.

– It is also the problem of storage. Oil is relatively safe and easy to store and has an enormous energy density. Now we will move on to fuels that are difficult to store. Hydrogen, for example, must be stored at – 250 C, which is no joke. Ammonia, on the other hand, is toxic.

Volume is another challenge, especially for the larger ships.

– Some of the largest ships use 80 tons of fuel a day. Should these be converted to hydrogen, the volume of hydrogen is six times greater than the fuel that they use today.  This is therefore one of the big challenges.

Despite these challenges, Rødseth believes that we within a few years will see unmanned ships that runs on fossil-free fuel.

– In the course of the coming years, we will see an increased interest for moving transport from the roads to the sea. Transport by sea is more energy efficient, does not take up as much space, and does not make noise, like transport by road does.
– As the owners of the goods become more concerned with green transport, it could potentially have a very large impact on transportation by ship. Eventually, they may be willing to pay two to three times as much for shipping, as long as they are able to cut the costs in other areas, says Rødseth.

He believes that this could mean that the large container ships will disappear, because they only can dock at the large ports.

– At the large ports, the cost of transshipment is quite high. Then the goods owners might want to send their goods by smaller ships that can go directly to the smaller ports.  This is something that has been seen in passenger transport by air.

– The flexibility of unmanned solutions looks quite promising. One is now beginning to see the advantage of not having to go through the largest ports, he adds.

He therefore believes that the large ships in the future will be replaced by smaller ships.

– This means that there will be a need for more ships. To keep costs down, these ships must be unmanned, says Rødseth.

The tendency he sees today, points towards smaller ships.

– It is an interesting exercise to dabble a bit with the question of whether it is wise to use large container ships, seen from a logistics perspective. Many people agree that it is not. The largest ships can only go to the largest ports, and there you get an accumulation of cargo.

– What is the biggest challenge today when it comes to unmanned ships?

– The Norwegian Maritime Directorate has not yet approved any unmanned ships for transporting goods. That it is the first step towards commercial use of unmanned ships. When it’s approved, I imagine that it will be possible to streamline this quite well. It is not easy to transport goods by unmanned boats. But if we compare it to unmanned vehicles, it is a completely different story, says Rødseth.
– What is important to remember is that the larger ships will almost always have a control room on land. This is due to the value of the ships. In addition, the ships will go slower, and there is more space at sea. Therefore, it is easier to transport goods by unmanned ships than by vehicle, he adds.

He don’t think we have to wait long to see unmanned ships carrying goods.

– The biggest hurdle is to get it done once, so we can see that it works. We are well under way with that. In ten years, I think it has begun to appear unmanned ships carrying goods.

– Are the companies on the fence, waiting for someone to take the first step towards using unmanned ships?

– Yes it looks like it. But we see that the goods owners have begun to take matter in their own hands.

– How sure are you that what you develop of technology today is not outdated in 10 years?

– The big manufacturers have a very sober attitude. The most important thing is not to make the technology too complicated. My experience of Norwegian industry is that we are most concerned with the technology working, not that it is unnecessarily complicated. In Norway, we also have a very big advantage in that we are a fairly large cluster. We have the users, the manufacturers, the shipyards; the entire value chain. They can work together to find solutions. If you go to Singapore or the US, they have fancy technology that probably has no use because it is too complicated. If the technology becomes too difficult, it also becomes difficult to test, says Rødseth.