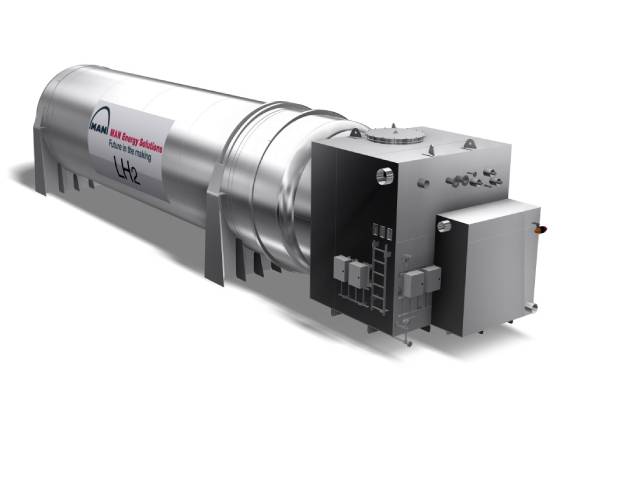 Back to previous page

MAN Cryo, the wholly-owned subsidiary of MAN Energy Solutions, has announced that it is working on a number of projects for liquid-hydrogen fuel-gas-supply systems (LH2 FGSSs) for various-sized vacuum tanks equipped with TCSs (tank connection spaces), and all relevant equipment for safety and function. The nature of the projects and owners remain, as of yet, undisclosed. MAN Cryo manufactures liquid-hydrogen systems at its own facilities in Gothenburg, Sweden.

Louise Andersson, Head of MAN Cryo, said: “These projects represent a huge milestone for us. Our announcement in December 2018 of the development of the world’s first hydrogen system attracted a lot of attention and we have since initiated several projects – currently in different stages – and with different class societies. Hydrogen is on everybody’s mind for a green future and also fits well with MAN Energy Solutions’ power-to-X strategy. We are very happy to take the lead with this alternative fuel that has so much latent potential.”

MAN Cryo developed a marine fuel-gas system for liquefied hydrogen in-house at its headquarters in Gothenburg during 2018 and 2019. The FGSS design concept has been reviewed and approved by several class societies.

The LH2 FGSS system has a scalable design that allows easy adaptation for different shipping types, sizes and conditions. The design is suited for both above- and below-deck applications, offering ship designers the flexibility to optimise their designs in relation to efficiency, and to cargo or passenger space.

MAN Cryo has long experience with cryogenic gases and solutions for storage and distribution. The company has also made numerous hydrogen installations over the years on land that, in combination with its extensive experience from marine fuel-gas systems for LNG, have proved invaluable when designing the new system.

Liquefied hydrogen has a temperature of -253° Celsius and is one of the absolutely coldest cryogenic gases there is, which places system components and materials under extreme stresses. Another design challenge was hydrogen’s explosive nature, with the MAN Cryo engineering team accordingly placing top priority on safety.

Once liquefied, hydrogen is reduced to 1/800th of its volume, compared to that of its gas phase, facilitating a more-efficient distribution. As a fuel, hydrogen does not release any CO2 and can play an important role in the transition to a clean, low-carbon, energy system. Liquefied hydrogen can be used to charge batteries for electrical propulsion via fuel-cell technology. In particular, Norway sees a bright future for hydrogen applications as part of its target of achieving zero fossil emissions within the marine sector by 2050.