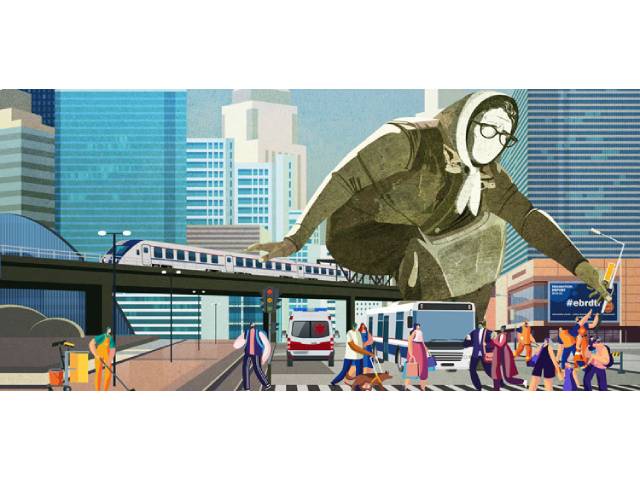 As the coronavirus pandemic sparks calls for more state intervention, emerging economies face tough choices to determine whether an increased role for government will have positive or negative long-term consequences.

The latest Transition Report from the European Bank for Reconstruction and Development (EBRD) says 45 per cent of people in the EBRD’s post-communist economies now favour higher levels of state ownership.

Citizens also increasingly expect the state to be able to reduce the health and economic risks they face.

Past epidemics have been shown to leave a large dent in people’s trust in the economic and political institutions that underpin democracy and the market economy.

The new report shows that individuals reaching adulthood during major recessions tend to have more positive views of public ownership and income redistribution.

In her foreword to the publication, entitled The State Strikes Back, the EBRD’s Chief Economist Beata Javorcik says the ability of emerging economies to deliver successful policies against a backdrop of increasing state influence depends crucially on the quality of institutions and public governance.

“The economies of the EBRD regions stand at a crossroads, with decisions on policies and institutions that are taken now potentially determining their paths for decades to come. The current period of crisis and upheaval triggered by the global pandemic represents a valuable opportunity to lay the foundations for a wealthier, fairer and greener future,” says Javorcik.

Weak institutions would allow the “grabbing” hand of the state to siphon off resources meant for people in need, give jobs to friends and family and let state banks be used for political gain.

Firms that could not operate profitably in a low-carbon economy may be kept alive as “zombie companies”, and firms that are nationalised during the pandemic may never be privatised.

On the other hand, good governance would allow the “caring” hand of the state to guide economies through the transition to a green economy, transparently providing essential support and adopting forward-looking policies.

Javorcik notes that privatisation, deregulation and measures to reduce state interference in the economy were the dominant trend following the collapse of communism in the late 1980s.

The EBRD was created at this time precisely to promote a smooth transition to private-sector-driven market economies.

Since then, however, the 2008-09 global financial crisis and subsequent recession have demonstrated that market forces alone will not always provide socially optimal outcomes and government intervention is needed to combat climate change and to deal with the increasing challenge of economic inequality.

The EBRD combines its investments across 38 emerging economies with support for policy reform that fosters good governance, economic inclusion and sustainable development.

The new report notes that state-owned enterprises continue to play an important role in the EBRD regions, providing almost half of all public-sector employment. It says they can be a stabilising force for economies, providing employment during downturns and in disadvantaged regions.

However, governments are not particularly effective in the management of state enterprises, which are likely to be less innovative than their private-sector counterparts.

State-owned banks have grown in importance across the EBRD regions since the mid-2000s and become major competitors to the private sector, because many have less stringent lending standards, lower net interest rate margins and a higher tolerance of non-performing loans.

A willingness of state banks to assume risks can help soften the impact of economic shocks. On the downside, however, firms that borrow from the state financial sector tend to be less innovative and show weaker productivity growth.

This is partly a reflection of the fact that state-owned banks may be more susceptible to political interference in their lending decisions and so channel finance away from more productive firms.

The report also says that EBRD economies are falling behind in the enforcement of policies that help reduce carbon emissions, in the wake of the 2015 Paris Agreement.

In the longer term, the state will have to facilitate the “creative destruction” that the low-carbon transition will inevitably unleash. This will involve supporting workers and communities that will suffer from the economic transformation.