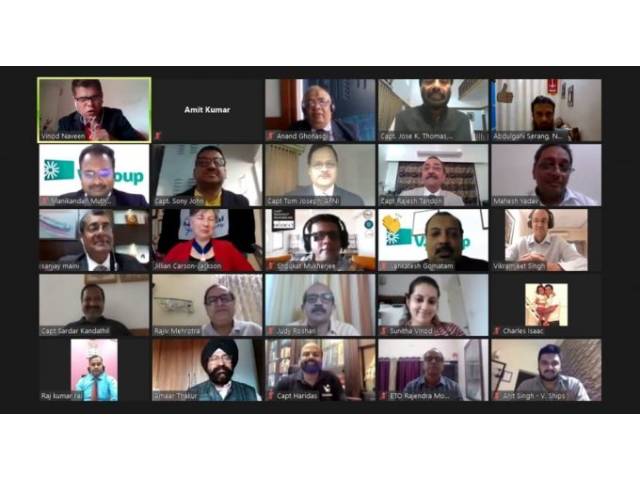 Colleagues in V.Ships India have been awarded a certificate of appreciation for their efforts to maintain the wellbeing of seafarers who are currently at sea due to restrictions put in place because of the global pandemic.

The award was presented during a virtual awards ceremony on 26 September by the Nautical Institute (NI) India South West, which is part of the global NI, a non-governmental organisation for maritime professionals with consultative status at the International Maritime Organization.

‘In grateful recognition of your hard work, commitment and personal sacrifice in serving the needs of your fellow citizens around the world. As part of the global Merchant Navy community your work throughout the period of uncertainty brought about by COVID-19 has been especially important, is recognised and very much appreciated.’

During the virtual Zoom call, Captain Rajesh Tandon, Global Director, Industrial Relations and Seafarer Development, gave an introduction to V.Group with Manikandan Muthusamy, Managing Director for V.Ships India, outlining the services provided by the company, and Captain Venkatesh Gomatam, spoke about the challenges faced due to the pandemic and its impact on crew changes.

The longest-serving member of the V.Ships India team, Captain A.G. Ghonasgi, also spoke to the 500 plus global audience, and described his career from ships officer on the first ever vessel manned with full Indian complement in 1983 to his current role as a member of the shore team.

He was joined by Captain Charles Isaac, who shared his experience as a master as the global pandemic stopped all crew changes, and gave a seafarers perspective on efforts to bring him and his crew back via charter flight.