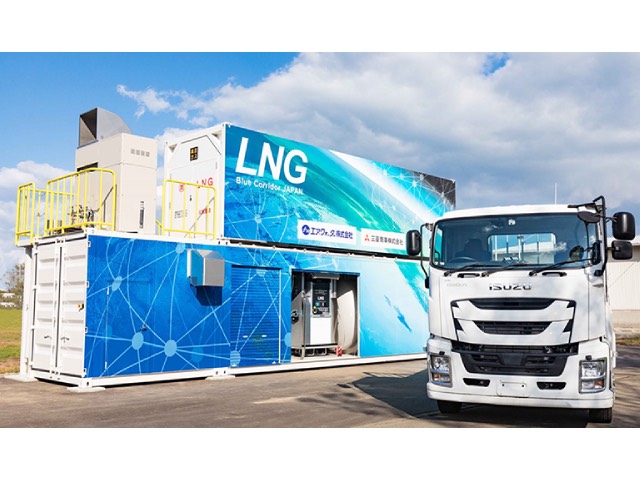 Mitsubishi Corporation (MC) and Air Water Inc. (Air Water) have jointly developed a compact LNG filling facility (Facility) *1 that can be used in space-limited logistics facilities. The equipment will be used to fuel heavy LNG-powered trucks.
This is the first portable filling system in Japan and the world’s first off-grid power-generation system capable of fueling trucks with LNG even during power outages. Furthermore, by circulating hot water through its waste-heat recovery mechanism, the system can help to prevent freezing problems associated LNG operations in cold or highly humid regions.
In November, MC and Air Water will begin testing the system in Hokkaido, where it will be used to fuel three heavy LNG trucks, one manufactured by Isuzu Motors Ltd. and the other two by Italian firm. With the cooperation of Hokkaido Electric Power Co., Inc., the partners plan to assess the system’s overall effectiveness and how much it can reduce CO2 emissions and fuels costs typically generated by heavy trucks. The results of the tests will help the partners to determine whether or not to make the system commercially available.
At present, heavy trucks fueled by LNG are not in commercial use in Japan. Most (approximately 500,000) of the heavy trucks on Japan’s roads are diesel fueled, and there are growing concerns about the need to reduce their CO2 emissions. Unlike trucks powered by electric batteries or fuel cells, LNG fueled trucks have ranges in excess of 1,000 kilometers, and tests have already shown them to be capable of cutting CO2 emissions by more than 10% when compared to diesel-fueled trucks. *2 The partners are also considering ways to further reduce CO2 emissions in the future, such as by using CO2-free LNG.
To successfully commercialize this system, the partners will be relying on an effective marriage of their respective assets and expertise. MC has been developing a wide range of LNG operations since 1969 and can claim both an extensive business profile and industry-wide know-how, while, in addition to its logistics field of network, Air Water boasts an impressive lineup of development-and manufacturing technologies in the field of LNG, including tanker trucks and satellite supply facilities. This joint project represents a meaningful step towards our transition to cleaner energies, and both partners are confident that it can help to realize low-carbon or carbon-free societies in the future. MC and Air Water are aiming to install this system in locations throughout Japan by mid 2020s, at which point they hope to be offering a competitive supply of automobile-use LNG to customers across the country.
* 1: With a footprint of just 3.3 x 12 meters (the same size as a parking space for a heavy truck), the new system is less than half of the cost of a conventional LNG filling station. At less than 10 minutes per fill-up, it also refuels quicker than conventional stations. The plant is to make each station capable of fueling more than 60 trucks per day. The patent application for the system has already been filed.
* 2: A heavy LNG powered-truck built by Isuzu Motors Ltd. was used in tests undertaken as part of the Ministry of the Environment’s “Low Carbon Research and Development Program”, which ran from 2016 to fiscal year 2018. The tests confirmed that the truck had a range of more than 1,000 (primarily highway) kilometers per fill-up in city-to-city transport, and that it also produced less than 90% of the CO2 emissions produced by diesel-powered trucks that meet Japan’s heavy vehicle fuel efficiency standards set in fiscal year 2015.