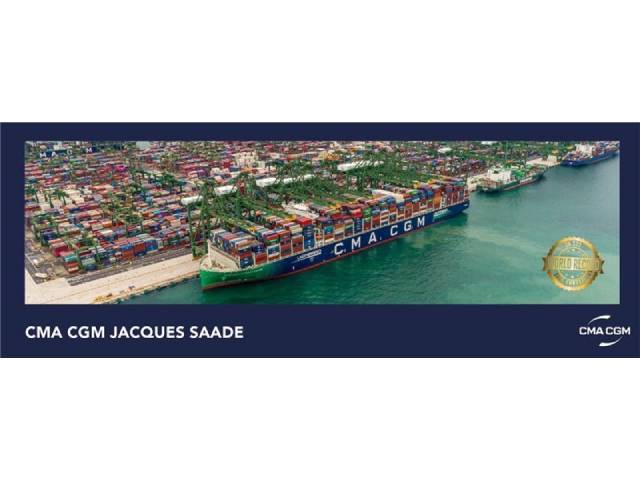 CMA CGM JACQUES SAADE, a vessel like no other

“To carry so many containers we have to be able to stack them 10 or 11 high on the deck, giving rise to strict constraints linked to the vessel’s structure and, crucially, how containers are stowed,”

“The vessel is so well designed that we were able to pile containers of over 10 tons in a 10-high stack, which is outstanding.”

To complete the loading process, all our teams have to work together completely seamlessly. The cargo flow teams need to have positioned the containers at the yard in reverse loading order ahead of the ship’s arrival.
It also involves substantial cooperation between the port teams and the ship planner to decide on the crane split—the number of cranes that will work on the vessel during the call.

4,000 movements by 9 different cranes during the call in Singapore

“During the call in Singapore, the 9 cranes in position completed around 4,000 (loading and unloading) movements. All the cranes had to have the same number of movements in order for the operations to be completed at the same time, and to avoid any reduction in our productivity,”

The CMA CGM Jacques Saadé stands out from other Ultra-Large Containerships (ULCS) like the CMA CGM Antoine de Saint-Exupéry (20,600 TEUs) in that it can carry one extra row of containers.

“It may not seem like very much, but some ports are not yet equipped with cranes that can reach the final row. That means the ship planner needs to take this into account in the loading plan. It requires intricate planning down to the finest details.”

So, the finest details really do matter on a ship able to carry a load of over 220,000 tons on each trip.