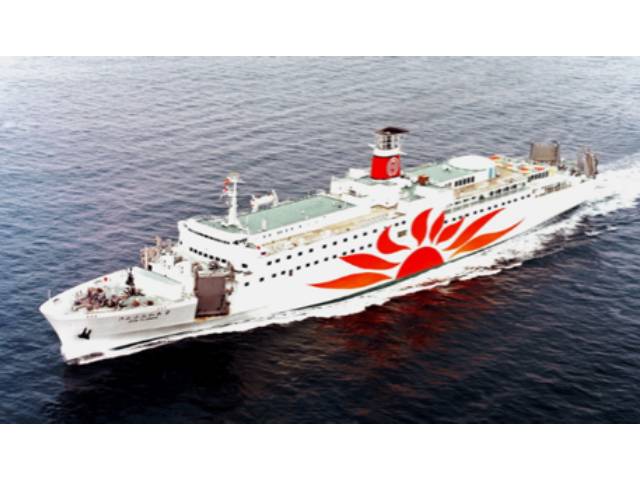 ~ Recognizing a pioneer in logistics that ushered in the era of the high-speed
diesel cargo ship; Luxurious, high-speed, large-scale car ferry that
set the pace in Japanese cruising ~

MOL announced that the MOL-owned Kinai Maru(Note 1), and Sunflower(1st generation)  (Note 2) (trademark owned by MOL Ferry Co., Ltd.), have earned “Ship Heritage” certification from the Japan Society of Naval Architects. This is the second time for MOL to receive this honor, following the selection of the engine control console installed on the bridge of the Kinkasan Maru in 2017. (Note 3)

The certificate recognizes the Kinai Maru as a historic cargo vessel that cut about 10 days off the voyage between the U.S. and Japan, marking the full-fledged era of the high-speed diesel cargo ship in the early Showa Era (1926-1989) and the Sunflower (1st generation), a luxurious, large-scale, high-speed car ferry, as a pioneer in Japanese cruising.

The Kinai Maru, a general cargo ship built in 1930, featured a more powerful diesel engine than any merchant vessel of its time, and led to significantly faster voyages. Especially in the transport of raw silk, it marked a major innovation in logistics, shifting trade to a direct route via the Panama Canal from a combination of ship and rail transport.

The Sunflower (1st generation) represents a new era for luxury car ferries, offering the same level of facilities as cruise ships. The MOL Group was not involved with its building or operation, but since then, many ferries bearing the Sunflower name have been launched, including the Sunflower Satsuma and Kirishima (Note 4), which received the “Ship of the Year in Garner Large Passenger Ship Sector Award” last year. It was selected for Ship Heritage certification as the first generation.

The Japan Society of Naval Architects marks the 120th anniversary for its founding this year. The “Ship Heritage” certification project was launched with aim of widely popularizing the historic value of ship-related heritage among the public in Japan, helping to pass it along to future generations as cultural heritage. This year, eight vessels were selected for the certificate from public nominations for vessels and other ship equipment and facilities that have historic, academic, or technological value (a total of 32 certificates have been issued since 2017).