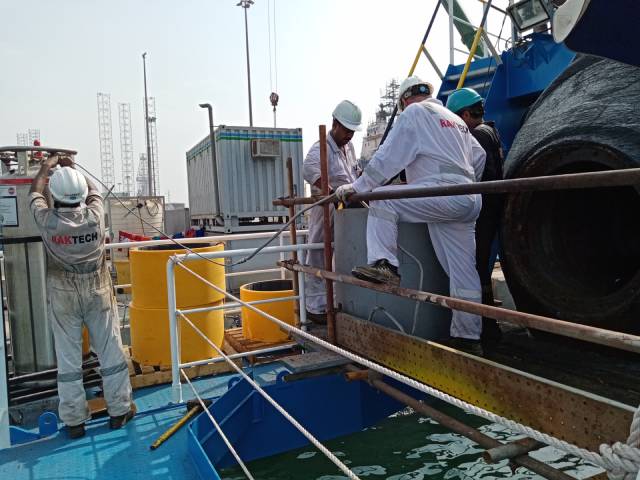 Mohammed Fawzy Khalifa, Fleet Manager, NMDC, said: “We have been using Thordon’s grease-free elastomeric polymer bearings since the 1990s. Compared to traditional rubber cutterhead bearings, we find that Thordon Composite reduces vessel operating costs substantially. The bearing requires no lubricating grease and extends bearing wear life fourfold, which is very impressive given the type of environments in which these dredgers operate.”

NMDC has converted all of its dredgers except two to the Thordon system. However, Qureshi revealed OPI is in discussions to convert the rubber bearings aboard these final two vessels.

George Morrison, Thordon Bearings’ Regional Manager, added: NMDC – one of the world’s leading dredging companies with a fleet of more than 90 vessels – has established a strong reputation for delivering high quality projects and services. It is nice to think that Thordon’s water lubricated Composite cutterhead shaft and intermediate bearings have played an important role in that success.”

After 100,000 operating hours dredging up silt, sand, rocks and stones in some of the toughest marine environments the Thordon Composite bearing installed on the Al Mirfa’s dredge cutterhead shaft “did not need replacing and was still in perfect working condition,” said Morrison.

“This is due to the bearing’s black homogeneous material, GM2401, which is fused to a stiff, high strength (yellow) polymer sleeve to provide unprecedented performance and environmental safety. Thordon Composite bearings are available for a wide range of shaft diameters in both tube and stave configuration.”