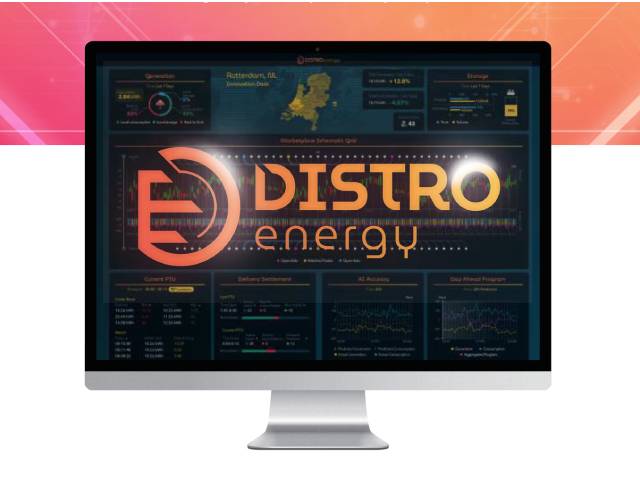 In recent months, 32 companies at the RDM site in the port of Rotterdam have been testing a new energy platform: Distro. Working with solar panels and a battery, users trade energy they have produced themselves in a local market. This is the first time in the world that blockchain technology, artificial intelligence and high-frequency commodity trading have been combined in a single platform. The successful trial shows that it is possible to coordinate supply and demand in local markets 48 hours in advance through a platform on the basis of fair prices and transparent trading agreements.

The Distro platform was developed by S&P Global Platts, a division of S&P Global, and Blocklab, a subsidiary of the Port of Rotterdam Authority that specialises in blockchain solutions. The new initiative helps companies in the port to reduce energy costs by making better use of locally produced electricity and by smoothing peaks in demand on the electricity grid. All this fits in with the climate goal of establishing a carbon-neutral port by 2050. Testing this summer demonstrated that the platform works and the coming months will be used to get it ready for commercial use.

A pilot project was conducted in the Innovation Dock, which houses innovative entrepreneurs. The Port Authority, as the owner of the Innovation Dock, used Distro to operate its own ‘micro-market’ of 32 users, as well as a roof full of solar panels and a battery to store the energy produced. Artificial Intelligence predicts the consumption and production patterns of individual electricity consumers, and trades kilowatt hours on the platform on the basis of those forecasts. The price of electricity fluctuates with changes in supply and demand. Batteries responding to price buy and store excess on-site solar energy that is generated when consumption levels are low, to re-sell it to users when solar generation is low.

The results include a 92% local consumption of renewable energy and a 20% increase in return on investment for the battery. Additionally, the pilot demonstrated a 14% improvement in revenues for locally produced renewable energy, while lowering average prices for consumers. In addition, trading between the participants means that a ‘micro-market’ places less of a burden on the regular electricity grid. In turn, that means that the Port of Rotterdam Authority, as the owner of the Innovation Dock, can reduce the capacity of the connection to the network and save costs by 25%.

The Distro platform is a response to two major developments: consumers are now also producers; and energy delivered by solar and wind fluctuates considerably. James Rilett, Innovation Director at S&P Global Platts: ‘At the distribution level, too, the electricity market has to become a mature market in which transparency will lead to better prices and the more effective use of infrastructure. The design of the platform is based on Platts experience of more than 100 years of providing price transparency to global commodity markets.’

The platform combines the capabilities of high frequency trading, with a blockchain environment that provides security for transactions, identity management and market rule compliance. Janjoost

Jullens (director of Blocklab): ‘We have now had more than 20 million transactions validated by a blockchain. So we know that the system can be stable and reliable, even with a high volume of transactions. Not only that, Banking as a Service from ABN AMRO Clearing Bank has demonstrated that the transactions on the platform can be processed in the banking environment.’

On the way to a carbon-neutral port

In the coming months, the software used in the pilot will be prepared for commercial use. Nico van Dooren, Director New Business & Portfolio Management at the Port of Rotterdam Authority: ‘This pilot project is good for everyone: not only are energy prices fairer and more transparent, the costs of sustainable energy are reduced for clients. This is a solution that will help to achieve the goal of a carbon-neutral port.’