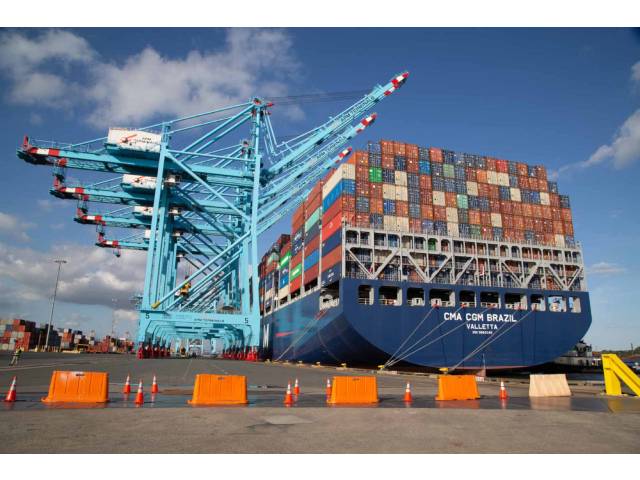 APM Terminals Port Elizabeth, located in the Port of New York and New Jersey, welcomed the CMA CGM Brazil on September 12. Built in 2020, the 366-meter-long, 51-meter-wide container ship with a capacity of 15,072 TEUs is the largest vessel ever to call the U.S. East Coast.

The landmark arrival of the CMA CGM Brazil is a result of investments made by the Port Authority of New York and New Jersey and APM Terminals over the past few years.

Improvements included the Bayonne Bridge Navigational Clearance Program, which increased the air draft of the bridge to 65.5m and a Harbour Deepening Program, which created a 15.2m deep shipping channel, have readied the Port of New York and New Jersey to welcome the next generation of ultra-large container vessels.

The CMA CGM Brazil is operating on a service which connects the U.S. East Coast to Southeast Asia via the Suez Canal. The ship is transporting clothing, furniture, toys, pharmaceuticals and food for distribution to retailers.

The CMA CGM Brazil arrived in Norfolk  on the 15th, and is expected to in Savannah on 18th, followed by Charleston, South Carolina on September 20, before returning east to resume her rotation.

The CMA CGM Group, a world leader in shipping and logistics operating a fleet of 500 vessels and serving more than 420 commercial ports worldwide, is a long-time partner of the Port of New York and New Jersey.  Larger ships such as the CMA CGM Brazil make the transportation of goods more economical while also contributing to local, regional, and national growth.