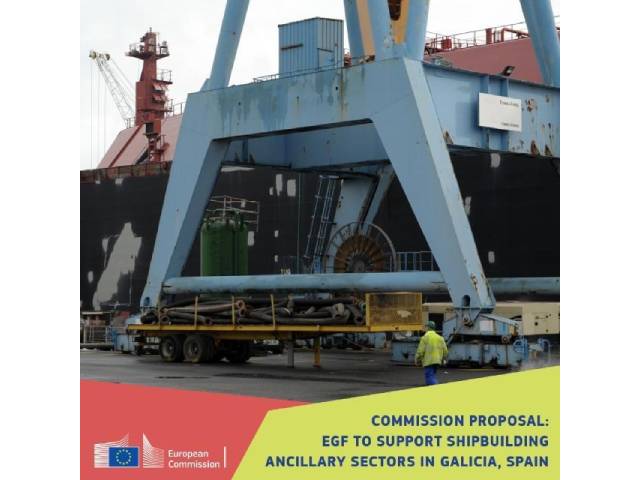 The European Commission proposes to provide Spain with €2 million from the European Globalisation Adjustment Fund (EGF) to help 500 former workers of sectors ancillary to shipbuilding in Galicia to find new jobs.

Nicolas Schmit, Commissioner for Jobs and Social Rights, said: “The European Globalisation Adjustment Fund is a clear example of EU solidarity. It provides funding for mentoring and retraining to workers who have lost their jobs due to globalisation or the economic crisis. The European shipbuilding sector is greatly affected by globalisation and a loss of global market share, with increased competition from outside the EU. We want to help the workers made redundant in Galicia by providing €2 million for their reskilling and upskilling efforts to find new job opportunities in other sectors.”

The EU’s declining market share in global ship production and the increased global competition have led to dire consequences for the ancillary shipbuilding industry in Galicia. Spain requested support from the EGF after 960 workers in ancillary enterprises to shipyards in Galicia were laid off between May 2019 and February 2020.

Around 500 redundant workers are expected to participate in the support measures co-financed by the EGF. The package aims to provide them with career guidance, support in their job search, opportunities to learn new skills by means of vocational training, and tutoring and guidance after finding another job. In addition, workers will have access to various other incentives, such as a contribution to expenses for family carers and financial support to encourage quick re-employment. The total estimated cost of the package is €3.4 million, of which the EGF would provide €2 million. The remaining amount will be provided by the regional authority, the Xunta de Galicia.

The Commission’s proposal will now go to the European Parliament and the Council for approval.

The European Globalisation Adjustment Fund was set up to help workers made redundant as consequence of major changes in world trade patterns as well as a result of an unexpected financial and economic crisis. Since its start in 2007, the Fund has received 161 applications. Some €636 million has been requested to offer help to more than 151,000 workers and 4,429 young people who are not in employment, education or training.

The Fund scope includes support for the reintegration of workers made redundant, including fixed-term workers, temporary workers and the self-employed. Young people not in employment, education or training who reside in regions with a youth unemployment rate above 20%, can also be supported by the Fund.

Within the context of the current economic crisis, resulting from the COVID-19 pandemic, the EGF could also be mobilised in case of massive permanent dismissals. For 2020, €177 million is still available.

The post-2020 legislation as well as the annual ceiling is currently under negotiation with the European Parliament and the Council.