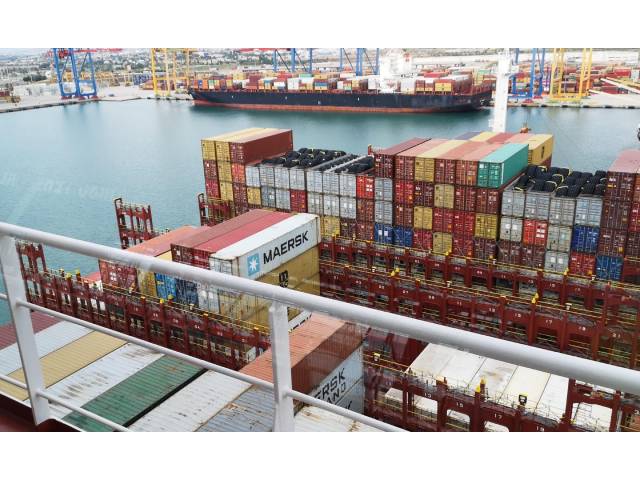 This is the first time that the figure of 500,000 TEUs has been exceeded in a single month by a spanish port. A record that reaffirms the recovery of traffic after the worst of the COVID-19 and the relevance of Valenciaport for the import and export of the Valencian and Spanish economy

August stands out for the increase in full container loads (exports) with a growth of 18.18% compared to the same month last year

The figure of 503,482 represents an increase in traffic of 7.07% in the number of containers managed; and 2.45% of the tons of goods that have passed through the Valencian terminals (7.2 million Tn)

The Port Authority of Valencia (PAV) is confident that August will mark the turning point, the before and after, of the recovery of import/export operations and of Spain’s commercial activity with the rest of the world

The accumulated traffic for the year exceeded 51.2 million tonnes, a figure that is still 7.41% below that reached in the same period of the previous financial year; and calculated in TEUs (20-foot containers, or 6.1 metres) the accumulated total now stands at 3,452,112 units: 7.35% less

València, September 14th, 2020.- 503,482 TEUs. This is the number of containers that were loaded and unloaded at the terminals in Valenciaport during the month of August. This is the first time that the half million containers have been exceeded in one month; a quantity which, in addition to setting the historical record for monthly movements, reaffirms the recovery trend observed in the months of June and July. Until August 2020, the two best months in the history of Valenciaport statistics were July 2019, when 494,262 TEUs were handled, and May 2019 (490,587).

Table 1.  The 10 months with the highest container movement managed by Valenciaport

August record consolidates Valenciaport’s leading position in import/export operations in the Spanish port system, at a time marked by the health and economic crisis generated by the Coronavirus pandemic. This is a positive sign of the recovery of the economy and of world commercial traffic, whose main route for generating wealth and making industrial activity more competitive is the maritime service.

In this sense, it is worth noting that last month also saw an increase in the number of ships working in the Valenciaport facilities, rising from 666 in August 2019 to 752 last August. (Also calculated in gross registered tonnes, or GT – 24,677,530 – the increase was 7.38%).

In this increase in commercial activity, the growth of full containers, 11.52%, stands out, and especially the TEUs dedicated to exports, which register a positive behaviour of 18.18% in this month of August with respect to the same month of 2019. This figure reflects the activation of the production of goods and products of Spanish industry and its sales abroad.

With regard to import containers, these fell by 1.36% while those dedicated to transit increased by 12.7%. In addition, there was a 5.92% drop in empty containers during August. This was a month in which Valenciaport exceeded 7.2 million tonnes of goods, 2.45% more than in August last year, thus achieving a double positive traffic evolution indicator: in containers and in tonnes.

Furthermore, this milestone in container movement has its continuity with the growth of 12.94% in total containerised goods, which reached 5.8 million tonnes and contrasts with the 45% drop in bulk goods. This month of August also saw a decrease of 6.94% in ro-ro traffic, a much more moderate figure than in previous months.

From the Port Authority of Valencia this historical mark has been put in value in the movement of TEUs and it is hoped that August will be the turning point in the recovery of the import/export activity in Spain that in the last months has been marked by the crisis of the Covid-19, mainly in the month of May. The data – both in terms of containers and tonnes of goods, as well as the latest figures for the VCFI and the reduction in the idle fleet – are an invitation to optimism, as a sign of the beginning of economic recovery in the world’s main economies.

In August, the countries which increased their trade relations with Valenciaport the most (table 2) were India (+61.88), Italy (+118.44) and Morocco (+66.1%). As far as the countries with which most containers were handled are concerned, the first position in August is occupied by China with 64,149 followed by the USA with 53,488 (table 3).

By product, the more than 87,000 containers with other goods (clothing, footwear, textiles and other consumer goods) stand out, followed by more than 50,000 TEU of construction materials or 46,000 TEU of chemical products (Table 4). The greatest increases in goods traffic per TEU (table 5) correspond to Rest of goods (+9.49%), Construction materials (14.14%) or Chemicals (10.14%).

In the comparison with 2019 of the accumulated figures for 2020, the data from Valenciaport continue to be conditioned by the Covid-19 crisis. Thus, in the first eight months of the year, freight traffic exceeded 51 million tonnes; 7.41% less than the same period in 2019. In the same eight months a total of 3,452,112 TEUs were mobilised, 7.35% less than the previous year.

According to the form of presentation of the goods, those arriving by container showed a more moderate trend with 39.93 million tonnes and a decrease of 4.57%, while the rest of the goods (liquid bulk, solid bulk and non-containerised) showed negative double-digit figures.

In this context, the agri-food sector showed a similar trend to the previous year between January and August, with a slight fall of 1.8% and around 5.2 million tonnes of goods moved. Within this sector, if we count the goods that have arrived by container, it registers an increase of 5.36%, with positive figures both in exports (+2.14) and imports (+17.97).  In the year as a whole, the increase of 18.93% in non-metallic minerals also stands out. In the case of vehicles, the fall was 16.16%; and in construction materials 5.58%.

In the year, Valenciaport managed 315,368 vehicles commercially, 37.13% less than the previous year; although it should be noted that in this month of August the decline was more moderate (-6.94). Passenger traffic continues to be marked by the Covid-19 pandemic in the cruise sector (-88.3%), while regular line passengers have fallen by 39.6%.

Baltic Dry Index as of April 20