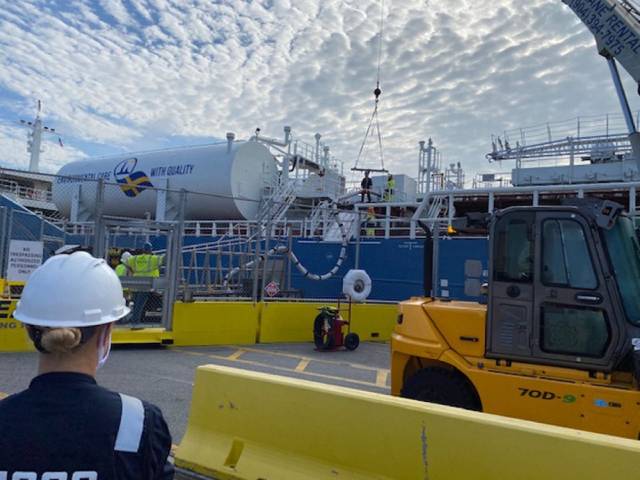 The Swedish tankship, Fure Ven, moored alongside Talleyrand Marine Terminal to take on LNG as fuel. The Fure Ven is the first-ever foreign vessel with plans to bunker LNG in Jacksonville.

LNG is a natural gas that has been cooled to a liquid at -260 degrees Fahrenheit. In liquid form, the volume is reduced to about 600 times that of its gaseous state, making it possible to transport and use as a transportation fuel.

Vessels that use LNG as fuel are able to reduce carbon dioxide emissions by approximately 25% when compared to conventional marine fuels. With the International Maritime Organization adopting strict regulations on emissions, LNG offers a clean alternative with 100% reduction of sulfur oxides and 90% reduction of nitric oxides when compared to heavy fuel oil.

“There are over 150 existing non-gas carrier foreign vessels that are utilizing low flashpoint fuels as a marine fuel and over 200 more vessels on order. With the increasing eco-friendly demands, Fure Ven marks the inaugural foreign vessel gas bunker operation to occur in the U.S,” said Lt. Yue Shen, Liquefied Gas Carrier National Center of Expertise.