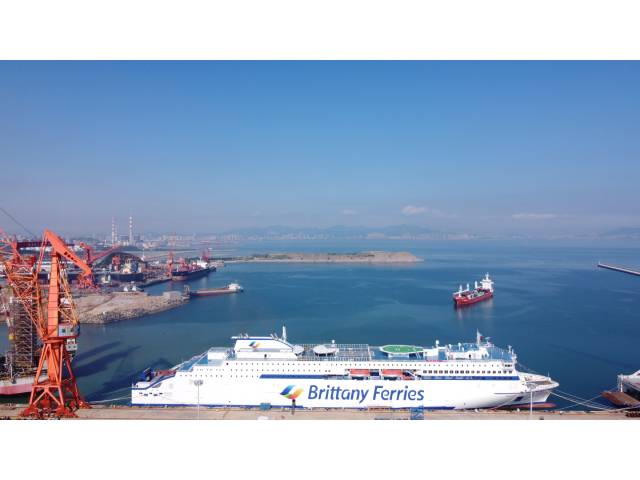 The Galicia, the first of three ships in the E-Flexer class ordered by Brittany Ferries was delivered on September 3. The vessel is the third E-Flexer of nine ordered by Stena RoRo from the Chinese shipyard CMI Jinling (Weihai). The Galicia will be chartered by Brittany Ferries on a long-term basis and has been especially adapted to the wishes of the French ferry company.

Construction of the E-Flexers is based on a standard developed for flexibility, and each vessel is tailored to customer needs. An example of an adaptation made in accordance with the wishes of Brittany Ferries is that the basic model car deck on deck 7 has been converted to cabins. This, in combination with the deckhouse having been extended on both decks 7 and 8, has enabled the number of cabins to be increased from 175 to 343. In addition, the Galicia has two scrubbers, one for each main engine, and two extra lifeboats added due to the ferry’s increased passenger capacity.

The interior has been designed by Richard Nilsson at Figura Architects, with whom Stena RoRo has been collaborating for quite some time. The public spaces on decks 7 and 8 have been partially given over to other functions compared to the basic model, but largely follow the E-Flexer standard. The design of the public spaces and the color scheme, however, are entirely unique and draw inspiration from Spain and the region after which the ship is named.

“The Galicia is special because she is the first in the E-Flexer series to be delivered to an external customer,” says Per Westling, CEO for Stena RoRo. “The design has been adapted to Brittany Ferries’ special requirements and the yard has been able to deliver according to schedule despite the ongoing pandemic, which we are very happy about.”

“This is a significant milestone in our fleet renewal planning and we are delighted that we will shortly be welcoming Galicia to the Brittany Ferries family. The E-flexer class of ships are well suited to our long-haul routes. I am convinced that passengers will be as thrilled to travel on them as we are to take delivery of Galicia today”, says Christophe Mathieu CEO Brittany Ferries.

Stena RoRo has an agreement with Brittany Ferries for long-term charters of two more vessels in the Stena E-Flexer series. Both will be powered by LNG, are under construction and will be delivered in 2022 and 2023, respectively.

Brittany Ferries and Stena RoRo are also taking the opportunity to jointly make a donation to The Mission to Seafarers´ Flying Angel Campaign supporting seafarers needs as a result of Covid-19.