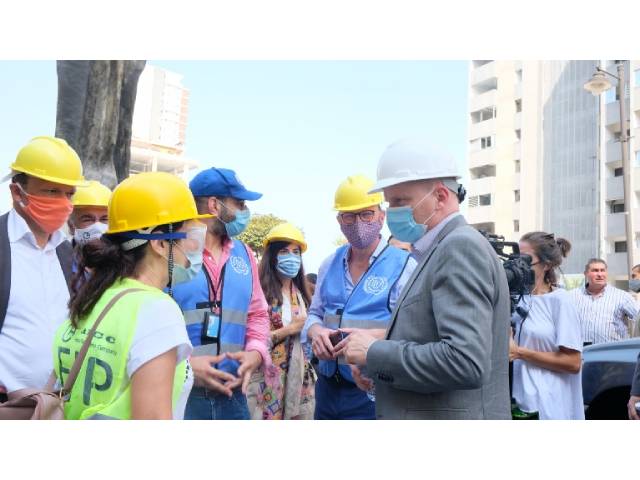 Workers mobilized as part of the International Labour Organization’s Employment Intensive Infrastructure Programme are contributing to the city-wide clear-up operation.

ILO Acting Regional Director for Arab States, Frank Hagemann, and German Ambassador to Lebanon, Andreas Kindl, have met with workers who have been employed under an ILO programme that is helping clear the wreckage of the huge explosion that tore through Beirut in August.

Within days of the blast, the ILO mobilized its on-going Employment Intensive Infrastructure Programme (EIIP), so far creating around 200 decent jobs for Lebanese nationals and Syrian refugees, 15 per cent of whom are women. Its aim is to help restore livelihoods and provide much-needed income in the aftermath of the blast, which claimed the lives of around 190 people and caused devastating damage to homes and businesses across the capital.

The ILO’s response is being supported by Germany through the German Development Bank (KfW) , which is funding EIIP, and through additional financial support provided by the Netherlands under the Partnership for improving prospects for forcibly displaced persons and host communities (PROSPECTS) , which helped up-scale interventions and reach more vulnerable workers.

Officials toured an area of the city which was hard hit by the explosion, and spoke to workers as they cleared rubble and debris.

“The ILO was able to quickly respond to the blast and its aftermath by creating jobs for Lebanese and Syrian workers in the clear-up works,” said Hagemann. “Many of these workers were previously unemployed, and their economic vulnerability was compounded over recent months by the multiple crises affecting Lebanon. With the support of our development partners, the governments of Germany and the Netherlands, we will continue to promote employment and rebuild and restore livelihoods, to help meet the decent work needs of Lebanon and its residents,” Hagemann added.

“We appreciate very much the ILO’s fast response to direct resources and to direct the assistance they are doing in the employment intensive infrastructure programme to places like here, close to the blast (…) and have workers working here since almost thirty days, clearing the rubble,” said Ambassador Kindl during the work site tour. “I have seen that Lebanese and Syrians are working together and I have seen that there is a relatively high percentage of women working on the site which is a very good thing.”

The ILO is promoting a decent work approach in its response to the blast, focusing on generating immediate short-term job opportunities for vulnerable Lebanese and Syrian men and women, while addressing structural labour market challenges in the country, including high rates of unemployment, particularly among youth.

“Many young people are not working and they were encouraged to come and help with the clean-up operations. We have here young men and women working together hand-in-hand,” said Ktarig Garabedian, one of the team leaders supervising a group of workers.

Syrian Mohamad Moussa Al Ibrahim, who fled to Lebanon eight years ago with his family, says he is happy that he was able to find work through the programme: “I am the oldest of my siblings and I am the only one working so I really need this work.”

The ILO is also exploring ways in which it can support Micro, Small and Medium Enterprises (MSMEs) in the aftermath of the explosion. Many of these businesses were already struggling due to the COVID-19 pandemic and the economic crisis. Options for support include cash grants and technical help so that businesses can rebuild and become more resilient to future crises and economic shocks.