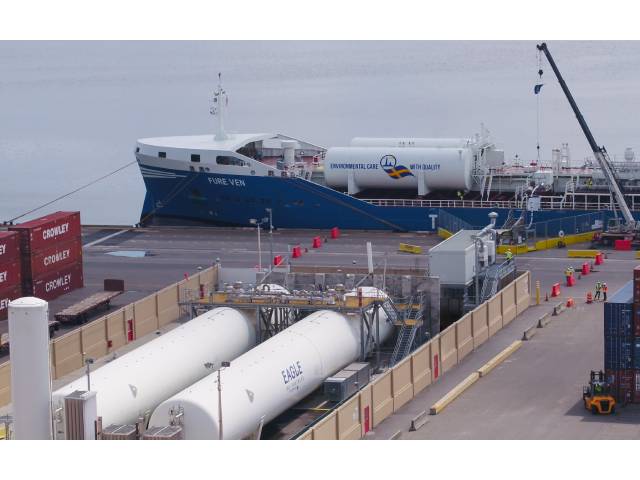 FURE VEN, a dual-fuel vessel owned and operated by Furetank of Donsö, Sweden, a global leader in the development of efficient and environmentally friendly product & chemical tankers, has become the first non-U.S. flagged vessel to bunker LNG in a U.S. port. Eagle LNG Partners, a pioneer in small-scale LNG and an LNG bunker supplier, is the first company to deliver LNG bunker fuel to a foreign flagged vessel.

This milestone paves the way for more international trading vessels to bunker at Jacksonville Port Authority (JAXPORT), marking the latest tangible demonstration of LNG as a safe and reliable fuel solution. It also builds confidence in the case for LNG to help the shipping industry meet increasingly stringent environmental regulations, while still generating substantial cost savings.

The 18,000 DWT vessel transited the St. Johns River on 1 September, calling at JAXPORT’s Talleyrand Marine Terminal which serves Crowley Maritime Corporation. Eagle LNG Partners safely transferred 225 metric tonnes of LNG to the vessel from their on-site storage facility, with the bunkering evolution taking less than sevenhours to complete. The tanker was laden with renewable diesel cargo for Preem, the largest petroleum and biofuels company headquartered in Sweden.

GAC assisted all parties by broking the LNG fuel and providing ship agency services to the vessel during her voyage across the Atlantic Ocean. It was the first time that GAC’s Bunker Fuels division had secured a deal to supply LNG as a marine fuel.

FURE VEN is one of Furetank’s V-Series, a new generation of product & chemical tankers introduced in 2018, which leverage innovative design features and LNG to deliver a fuel reduction of approximately 40%. These climate smart vessels have also achieved substantial reductions in emissions – 55% less CO2, 86% less NOx, 99% less SOx and 99% less particulate matter (PM) – compared to vessels of the same size, of earlier designs. According to a study from the Swedish Environmental Research Institute in 2017, these reductions achieved by FURE VEN during this voyage alone have been calculated as an economic savings for the global community of more than $200,000, thanks to a reduction in the negative impacts of climate change and air pollution on human health and agriculture. If liquefied biogas was bunkered, then CO2 emissions would be eliminated completely.

Lars Höglund, CEO of Furetank, said: “As early as 2014, Furetank decided to convert one of our vessels to LNG propulsion. Backed by the encouraging effects thereof, we developed the V-series, a vessel design with drastically lowered emissions and fuel consumption. These vessels have already cut CO2 emissions beyond the IMO target of a 50% reduction by 2050.

“We note with pleasure that LNG bunkering is becoming available in more and more places, not least the U.S., and we are confident that investing in the V-series particularly contributes to a cleaner environment worldwide.”

Sean Lalani, President of Eagle LNG, said: “As a pioneer in LNG bunkering and a global leader in small-scale LNG, the team at Eagle LNG is proud to have partnered with the trailblazers at Furetank and GAC, along with numerous crucial stakeholders including JAXPORT, Crowley Maritime and the U.S. Coast Guard, to safely accomplish this first-ever LNG bunkering in the United States. It is only fitting that this first bunkering happen in Jacksonville where JAXPORT, local officials and the community have embraced the shipping industry’s transition to the more sustainable, affordable LNG.

“Were it not for the pioneering spirit of our partners at Crowley Maritime, with whom we have already safely completed over 100 bunkering events, and the vision of Chairman and CEO Tom Crowley, this historic milestone for LNG bunkering globally and for North Florida would not have been possible,” continued Lalani. “We look forward to utilizing our experience and assets to bunker more international vessels from this facility and our future operations in the Caribbean Basin in the coming months and years. Thank you to the innovators at Furetank and GAC for entrusting us with executing this monumental milestone.”

Nicholas Browne, GAC Bunker Fuels’ Global Director, said: “We are proud to have worked alongside Furetank and Eagle LNG to deliver the safe and successful refuelling of FURE VEN in Jacksonville. Like Furetank and Eagle LNG, GAC wants to do more than simply follow the development of environmentally friendly shipping – we want to play an active role in creating and facilitating the transition.

“As an integrated service provider for all types of vessels, including LNG carriers, GAC is uniquely positioned to deliver its first LNG bunker supply to the FURE VEN, and we are actively being engaged by many of our shipping principals to support their adoption of LNG as a marine fuel.”