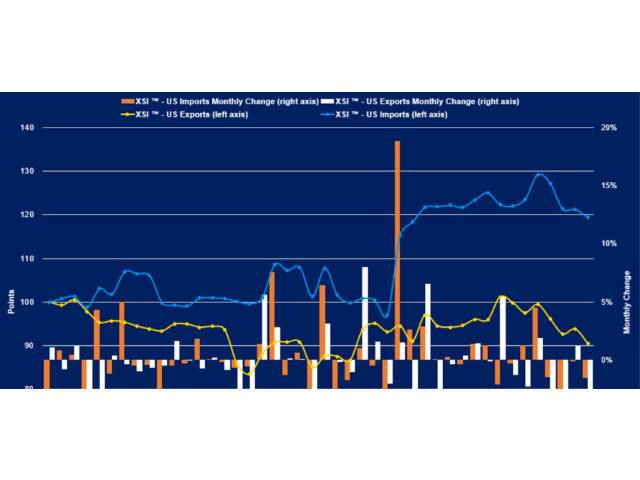 Despite the economic shockwaves engendered by the ongoing global pandemic, the world’s leading carriers continue to display signs of effective strategic management skills. Many of the industry’s key players are posting robust Q2 results, while, according to the latest XSI® Public Indices report from Oslo-based Xeneta, global rates are still holding firm, albeit with August registering a 1.8% decline after an increase of 0.1% in July. This means rates are now just 2.2% down year-on-year – a figure that, given the impact of coronavirus on economic activity, is “surprisingly small.”

“When you look at how hard the leading national economies have been hit, the widespread disruption to global trade, I think most observers would have expected rates to collapse, but that hasn’t happened… yet,” comments Xeneta CEO Patrik Berglund.

Xeneta’s XSI® provides unique intelligence on the very latest ocean freight market moves, tracking real-time rate developments. Based on crowd-sourced data from leading shippers, the report utilises over 200 million data points, covering more than 160,000 port-to-port pairings, to provide unique industry insight. The index shows that Corona, together with wider economic factors, has caused rates to slip by 4.6% since April, meaning the global benchmark is now 1.9% lower for the year-to-date.

“That’s hardly good news for the carrier industry,” Berglund notes, “but it could be far, far worse. The key has been their proactivity, as they’ve sought to bolster rates by removing tonnage and adjusting routes in line with demand. That has both protected long-term contracted rates, pushed up spot rates and, it seems, helped deliver surprisingly strong financial results. I’m amazed to say this, but it appears to be a case of ‘so far, so good’ for many of the leading industry players.”

Berglund points to the latest results from, amongst others, Hapag-Lloyd and Maersk. The German carrier posted a net profit for Q2 of USD287m (against USD56m in Q2 2019), while the Danish giant registered a figure of USD443m – almost three times the net profit of Q2 2019, at USD154m. Niche carrier Zim, meanwhile, posted its best Q2 results in a decade, with a profit of USD25.3m. Lower fuel costs have been a factor, the Xeneta CEO says, but strong rates and blanked sailings have also helped drive positive results.

“But the question is, what next?” Berglund adds. “Spot rates are still looking strong – with Golden Week, FAK adjustments and Peak Season Surcharges ahead – but we can see on the latest XSI® there is now downward movement in long-term contracted rates across almost all benchmarks. With questions over how quickly national economies can recover, and the prospect of fresh lockdowns, in addition to scheduled newbuild deliveries boosting capacity, the waters ahead could be choppy for the container industry.

“If they can maintain rates discipline, and not rush for market share, while staying strategically proactive, then maybe they can continue to defy expectations. But it won’t be easy. With so much uncertainty on the horizon it is essential for all shipping stakeholders to access the latest market intelligence, such as XSI®, to gain optimal value from contract negotiations. Data is key to unlocking understanding of the present situation, so stay informed to stay ahead.”

The XSI® Public Indices’ regional analysis of major trading routes in August showed near uniform rates declines. European imports slipped by 0.7%, down 1.2% year-on-year, while the export benchmark fell for the third consecutive month, declining 3%. Nevertheless, it is down just 0.3% year-on-year.

The picture was similar in the US, with the import measure losing 1.5% of its value, while exports fell by 3.5%. Both benchmarks have slipped on a year-on-year basis, down 2% and 4.2% consecutively. Far East export rates held up better, rising marginally by 0.1% (down 2.1% year-on-year, but up 0.5% since the end of 2019) while the import figure emulated the downward trend elsewhere, slipping by 4.1%.

“It’ll be fascinating to see if this downward trajectory becomes established, or whether carriers can maneuver to, yet again, effectively support their all-important long-term contracted rates,” concludes Berglund.

“September’s XSI® will reveal more. There are, as ever, interesting times ahead for both the carrier and the shipper fraternities.”

Companies participating in Xeneta’s crowd-sourced ocean and air freight rate benchmarking and market analytics platform include names such as ABB, Electrolux, Continental, Unilever, Lenovo, Nestle, L’Oréal, and Thyssenkrupp, amongst others.