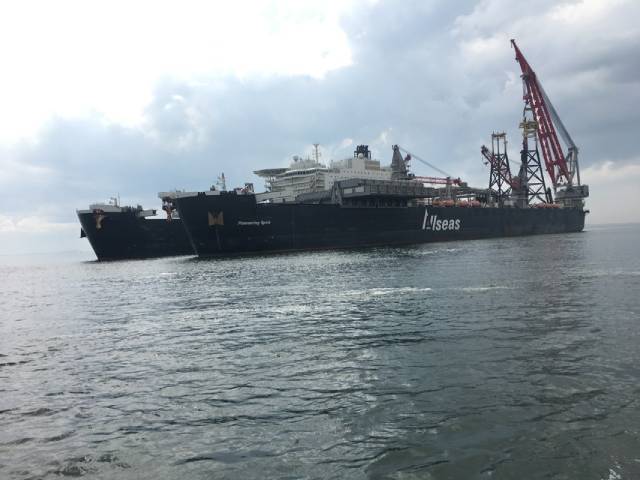 North Sea Port received a visit from an exceptional ship on Monday 17 August. The ‘Pioneering Spirit’, the largest construction and installation vessel in the world, called at the port in Vlissingen. The arrival was a real spectacle that attracted a lot of spectators.

In recent years, North Sea Port has developed in Vlissingen into a base and hub for the offshore sector. North Sea Port has made its offer in that area even more complete and diverse than it already was, as was perfectly illustrated by the carefully planned approach of the ‘Pioneering Spirit’.

North Sea Port receives some 9,000 ocean-going vessels of very different types and sizes every year. But the ‘Pioneering Spirit’ is a very special ship in terms of its shape and dimensions.It is designed as a gigantic catamaran, with two hulls connected by a central platform. The gap at the bows, which measures 122 metres by 59 metres, can accommodate a smaller ship, the barge the ‘Iron Lady’.

The ‘Pioneering Spirit’ is 382 metres long and 124 metres wide, covering an area equivalent to six whole football pitches. With the cranes at their furthest extension, those figures increase to a length of 477 metres and an area of eight football pitches. No other vessel in the world can measure up to that.

Moreover, the ship is effectively a floating village: in order to reduce the time-consuming and hence expensive business of shuttling personnel to and from the mainland, there is room for 570 people on board.

Hub for offshore and recycling

Offshore is the primary target market for shipping company Allseas. In particular, its focus is on the construction of new wind farms and the dismantling or ‘decommissioning’ of existing platforms. The ‘Pioneering Spirit’ has been specially designed to put in place or remove such large structures in a single movement.

Allseas is currently deploying the ‘Pioneering Spirit’ in the Danish part of the North Sea to remove drilling rigs in the Tyra field on behalf of the Total oil group. After thirty years of service, they are due for replacement.

The substructures of two offshore structures have now been brought to Vlissingen. Visitors couldn’t miss them. The cargo rose 110 metres above the water. The ‘flare jacket modules’ are themselves up to 78 metres high and up to 30 metres wide at the base, and weigh up to 1,800 tonnes.

They were placed on a pontoon at the Sloe buoys in Nort Sea Port in Vlissingen for further breaking at Sagro. The activities of this Zeelandic family-owned business at its terminal at the port’s Westhof dock include the environmentally-friendly recycling of such modules.

Deepest draught in the Scheldt estuary

For gigantic ships such as the ‘Pioneering Spirit’, North Sea Port offers another important advantage besides direct access to the North Sea. Of all the ports in the Scheldt estuary, this part of North Sea Port offers the best nautical accessibility. Since the dredging of a shallow area in early 2018, Vlissingen has been accessible to ships with a draught of 17 metres at high tide. That is more than the other ports accessed from this body of water.

The ‘Pioneering Spirit’ won’t reach that figure this time. It is calling at North Sea Port Vlissingen with a draught of 12 metres below the waterline. The ship is still displacing 60,000 tons or 60 million litres of water, enough to fill 24 Olympic swimming pools.