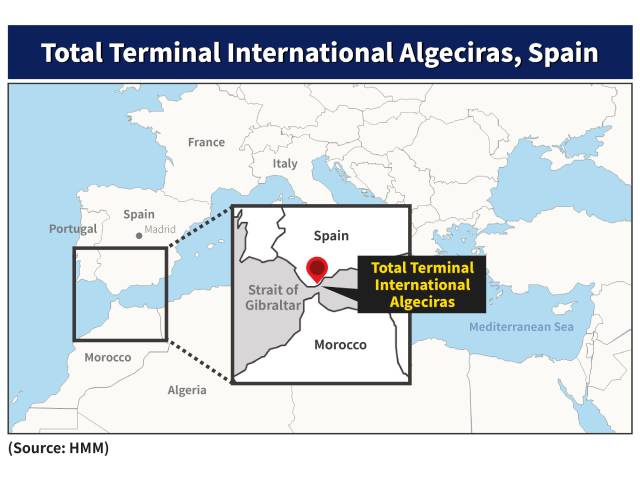 HMM announced that the company has signed a sales and purchase agreement with CMA CGM for the sale of its 50% stake minus one share in Total Terminal International Algeciras (TTI Algeciras), a container terminal in the south of Spain.

Shares of TTI Algeciras are owned by HMM and HT Algeciras which is a special purpose company wholly controlled by HMM. HMM directly owns a stake of 50% minus one share, with the remaining 50% stake plus one share held by HT Algeciras.

HMM has decided to sell its own 50% stake minus one share but still maintains its position as the largest shareholder through HT Algeciras.

The financial details including the price of the deal were not disclosed.

HMM expects a great synergy effect based on strategic cooperation with CMA CGM in terms of enhancing profitability and operational capabilities by securing additional cargoes.

HMM official said, “TTI Algeciras has a great geographical advantage to play an integral role as a transshipment hub located at the centre of containerised cargo flow on main trade lanes. We believe TTI Algeciras will take centre stage in the Gibraltar area as it has a high potential for future growth and development. We are expecting more business opportunities in the years to come based on stable operations of the terminal.”

This transaction, subject to regulatory approval, is expected to be completed in Q4 2020 for joint operations to be started.

Meanwhile, TTI Algeciras was formerly operated by Hanjin Shipping but HMM acquired a 100% stake in the terminal in 2017.