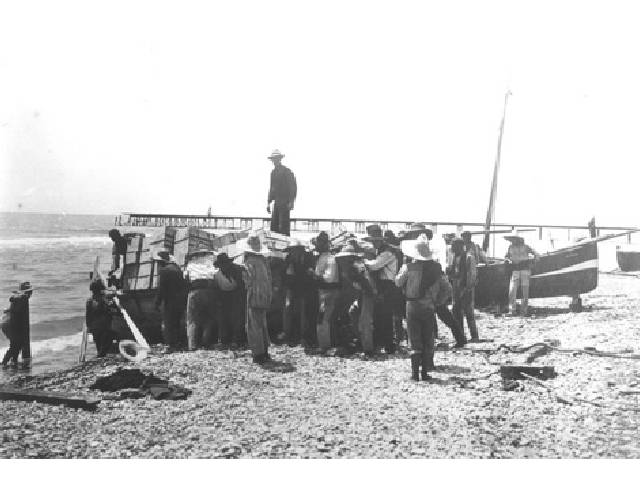 During August the social networks of Valenciaport will show photographs that reflect the evolution of the ports of Valencia, Sagunto, and Gandía

València, July 31st, 2020.- Valenciaport will carry out a historical tour with images of the ports of Valencia, Sagunto, and Gandía where the history and evolution of these infrastructures over the years can be seen. An initiative that will be able to be contemplated in its social networks: Facebook, Instagram, or Twitter throughout the month of August. The Ports have been an engine of wealth and life for their cities, and a reflection of the evolution of society over the years: fashion, customs, economic activity, and architecture are some of the aspects shown in this series of historical photographs of the ports of Valencia, Sagunto, and Gandia.

Ports are part of a society and are closely related to the exchange of goods that connect different parts of the world. Throughout history, ports have become more complex, first with the installation of quays to facilitate loading and unloading maneuvers, adaptation to the draught of ships or building accesses to connect with inland territories (via roads or railways). All this led to the construction of artificial ports, using dikes, piers, docks, and other facilities. In these images that can be seen these days on Valenciaport’s social networks, one can see loading and unloading operations, the arrival of the railway at the foot of quays, or the storage of goods that show how both the port facilities and the people and machinery that work in them have evolved.

The history of the ports of Valencia, Sagunto, and Gandía is closely linked to their environment and cities. A history that came together in 1985, as a result of Royal Decree 2100, where the ports of Sagunto and Gandía became part of the management area of the then Autonomous Port of Valencia, now the Port Authority of Valencia.

Valencia’s coastline, lacking any natural shelter, was a serious obstacle to the start of maritime-commercial exchanges. Despite this, there are records of this activity that date back to the 6th century BC. It is much later, because of the privilege granted on March 17th, 1491, to the Valencian knight Antoni Joan by King Ferdinand the Catholic, when we can establish the first precedent of properly port exploitation. From that moment on, the economic vigour of the Valencians materialized in a growing port trade, which led King Peter III of Aragon to grant Valencia the establishment of the Maritime-Commercial Jurisdiction of the Consolat de Mar. Already in the second half of the 15th century, the city of Valencia, with 75,000 inhabitants, was the most populated in the Iberian Peninsula, and its port was the most important in the Crown of Aragon, having shipping lines with ports in Italy, Western Europe, and North Africa.

For more information, you can consult the Valenciaport website