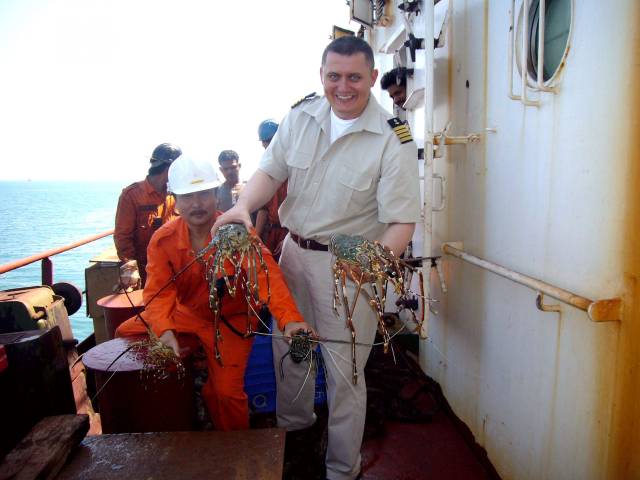 As RightShip prepares to launch its Safety Score, Vetting Superintendent Captain Vladimir Docekal shares memories of his time at sea and highlights the reasons why we must improve safety in order to enhance the physical and mental health of crews.

I grew up at sea. In fact, I was almost born on a ship. My father was a captain and I was sailing with him from the age of three. Sometimes, I spent my school holidays on board with him. On my father’s final voyage, I was his chief mate. It was the longest time we had together and was beneficial personally and professionally. I was always able to approach him with questions and learnt a great deal from him.

I have sailed on transloaders in difficult environments in the Persian Gulf – panamax-sized vessels geared with four eccentric cranes and longitudinal, cross and boom conveyors. We had tight schedules with no idle time, and it was very important to keep it in an excellent technical condition. We’d have six hours of work and six hours of rest. Even a small job should be planned beforehand and include briefing and supervising of people. Rest is as important as work. If people are not well-rested it can lead to mistakes and mental health concerns.

When I was third mate on a general cargo vessel, in 1993, we had a faulty lifeboat. There was a sophisticated system that allowed us to disengage but it wasn’t working properly. The hydrostatic interlock was malfunctioning, and no one knew until we started lowering the lifeboats. The system released the hooks prematurely and the lifeboat fell 4.5 metres, with 16 people in it.  Luckily both hooks were released simultaneously; if only one hook released it would have been left hanging. There were no serious injuries, but it was a good lesson in doing everything possible to prevent such an incident from occurring again.

Although no one was hurt, the 16 people were shocked and became distrustful of lifeboats. It takes a long time to re-built trust and confidence in people after such an incident, which also has an impact on mental wellbeing. We held extra safety meetings to explain how the system was repaired, tested and made fully functional again, to ensure the crew felt safe.

We completed a proper investigation into the releasing of the hooks. We shared the issue with the entire fleet. This was checked and we discovered the same situation on another vessel. We informed the lifeboat makers. We introduced the corrective preventions and made a change in inspection routines.

When I returned to shore-based work, I completed a ship management course at Lloyd’s Maritime Academy. I’m also a member of the Nautical Institute in London. I have always believed in increasing my professional knowledge. When you are sailing you have certain skills, but when you go ashore it’s different.

I have been fortunate to travel the world doing ISM code audits. Meeting people from several regions with different cultural backgrounds, I began to understand how people interpreted and fulfilled procedures differently. I was always interested in cultural differences and people’s approach to safety or taking shortcuts.

From an operational performance perspective, the Safety Score will have impact on the tradability. If a vessel has a high Safety Score and another score is lower, it will impact chartering opportunities. Managers will be focused on having a better safety score and showing their due diligence to ensure they are rewarded. They can see how their vessel looks compared to the peer group world-wide.

This also helps us to improve conditions for all people working at sea. Once you are working on board you are on the vessel for several months – it’s your home. You need to have safety in place, not just for physical protection, but for the mental wellbeing of the crew. This is something I am very passionate about. I am RightShip’s charity ambassador in London and I am pleased to see charities doing so much for seafarers from deck hands up to captains – the whole crew.

If you are part of the onshore shipping business, people often talk about nice incomes and the fluctuation of the market. Not so many people are talking about the sailor. If you are sailing for three weeks – for example, from Togo to Indonesia – you only see the sea and the crew. This can be a significant mental test. But when you come to a port, you can go to one of the charities such as the seafarer’s centre, make a call, take some books and relax in a different environment.

You have the feeling that someone really cares about you. Even if the captain is attentive, he is still your superior. But when you talk to someone from the outside, they treat you as a friend and this is very important for people who are away from their loved ones for long periods.

I am positive about the job we are doing by implementing the Safety Score. Improving the safety conditions on vessels will have a flow on effect. Providing people with safer conditions shows that we care about human rights and wellbeing.