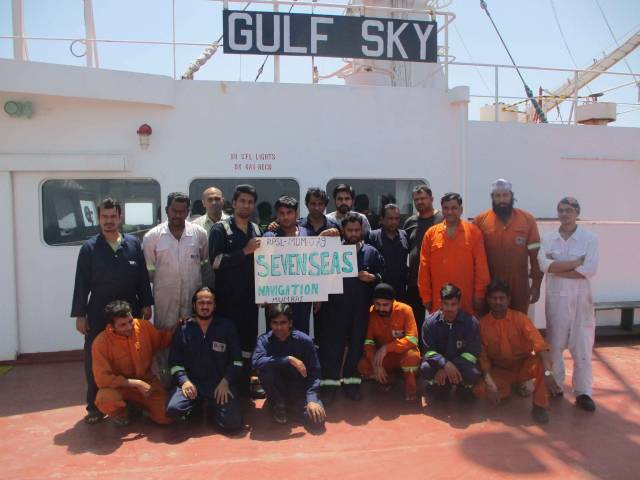 Human Rights at Sea and the Dominica Flag State Administration are increasingly concerned about the change in status of the MV Gulf Sky (IMO 9150377) and its crew, having been informed that the vessel, which was under arrest under a UAE Admiralty Law injunction and had been issued a Prohibition to Sail notice via the Commonwealth of Dominica while anchored off Port Khor Fakkan Anch, had left UAE waters violating both the injunction and the prohibition to sail. At the time of writing, the vessel’s location is unknown with the last AIS signal received eight days ago according to VesselFinder.com.

Both organizations are working hard with national and international authorities to identify the location of the vessel and to understand the condition of the 22 Indian crew sailing under Captain Joginder Singh.

US authorities were immediately put on notice by the flag Administration who became aware of the evolving situation earlier yesterday (13 July 2020).

Captain Singh, on behalf of himself and the crew, had previously contacted authorities seeking assistance, including Human Rights at Sea on 11 May 2020 resulting in the issuing of a case study on 27 May 2020, with follow-up reporting as to ongoing mediation on 2 June 2020 over crew wages and conditions onboard, which consequently saw a partnership between the flag and the charity established on 22 June 2020 to address the matter.

Human Rights at Sea CEO, David Hammond Esq. said, “Our first priority is to ensure that the crew are safe, are not under any form of duress either internal or external to the vessel, and that their location is identified as soon as possible. We are working closely with the Dominica flag and the UAE Federal Transport Authority to seek clarity of the facts.”

It should be noted that the Commonwealth of Dominica Office of Maritime Affairs and Marine Personnel has been engaged in an investigation of the Operator United Island Maritime Ventures PVT LTD and the beneficial owner Taif Mining Services LLC after the vessel was reflagged from the Liberian Register of Ships. It was discovered during the provisional registration period that the vessel was in fact tied to Amir Dianat, who is also known as Ameer Abdulazeez Jaafar Almthaje.

The discovery was a resultant factor of the Commonwealth of Dominica Office of Maritime Affairs and Marine Personnel advanced due diligence protocol to identify sanctioned parties who are engaged in illicit trade through maritime commerce. Mr. Dianat has been named by the United States Department of Treasury as a sanctioned individual within the Office of Foreign Asset Control’s sanctions list for his facilitation with Iran’s Islamic Revolutionary Guard Corps-Qods Force (IRGC-QF) efforts to generate revenue and smuggle weapons abroad. The designation of Mr. Dianat is taken taken pursuant to Executive Order (E.O.) 13224, as amended by E.O. 13886, which follows recent designations of key networks that support the IRGC-QF’s destabilizing regional activity.

Concurrent with OFAC’s action, the U.S. Attorney’s Office for the District of Columbia filed criminal charges against Mr. Dianat and one of his business associates for violations of sanctions and money laundering laws, and filed a related civil forfeiture action alleging that approximately $12 million is subject to forfeiture as funds involved in these crimes and as assets of a foreign terrorist organization (https://home.treasury.gov/news/press-releases/sm995)

President and CEO of the Commonwealth of Dominica International Ship Registry, Eric R. Dawicki states, ‘’The Commonwealth of Dominica Office of Maritime Affairs and Marine Personnel is first concerned about the health and welfare of the crew and is abundantly concerned that the crew was coerced to pick up anchor and get underway knowingly violating international and domestic law. Secondly, this office will not rest until we know the whereabout of the vessel and its crew. We will engage in a multi-national effort to locate and promulgate the release of the vessel to immediately return to UAE waters.”