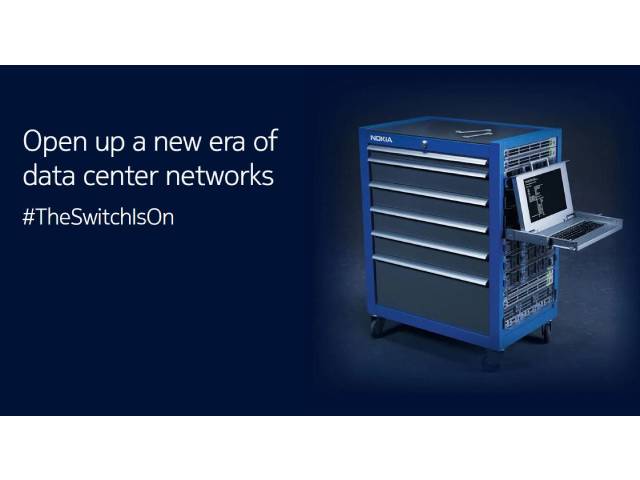 Nokia has redefined data center fabrics with the launch of a new and modern Network Operating System (NOS) and a declarative, intent-based automation and operations toolkit. This will allow cloud and data center builders to scale and adapt operations in the face of year-over-year exponential traffic growth and constant change brought on from technology shifts like 5G and Industry 4.0. The new Nokia Service Router Linux® (SR Linux) NOS and Nokia Fabric Service Platform (FSP) were co-developed with leading global webscale companies, including Apple, who is deploying the technology at its data centers.

Facing massive growth in demand for cloud-based applications and use of new technologies like AI, machine learning and AR/VR, today’s large and growing community of cloud builders require an unprecedented level of customization and flexibility from networking components to operate and monitor sprawling data centers.

Network Operating Systems have not kept up. Though evolving, traditional systems are restrictive and difficult to customize, integrate and automate. For example, today’s leading systems expose limited functions for customization and even then require cumbersome integrations. Often this means rudimentary applications that require re-compiling each time the NOS vendor upgrades releases. Newer open systems attempts are nascent, challenging to operationalize and generally unproven at scale.

Nokia SR Linux is a genuine architectural step forward as it is the first fully modern microservices-based NOS, and the SR Linux NDK (NetOps development kit) exposes a complete and rich set of programming capabilities. Applications are easily integrated through modern tools like gRPC (remote procedure call) and protobuf, with no recompiling, no language limitations and no dependencies. SR Linux also inherits Nokia’s battle-tested Internet protocols from the service router operating system (SROS), which is the trademark of the huge installed base of Nokia carrier-grade routers. SR Linux is in effect the industry’s first flexible and open network application development environment.

Nokia FSP provides the set of tools cloud builders need to implement intent and policy-based operation of the network. Well beyond a node-centric management system, FSP was designed to build, deploy and monitor the entire data center network with powerful network level constructs. Finally, the FSP includes technologies that were only available to the largest cloud builders, such as a real-time state-correct virtual digital twin for validation and troubleshooting.

The combined solution provides the openness, flexibility, robustness and automation to make data center and cloud environments easier to scale, adapt and operate.

Neil McRae, BT Group Chief Architect, said: “As one of the world’s leading communications services companies offering security, cloud and networking services to consumers and businesses, we consider data center automation as a foundational technology for our telco cloud model. Nokia’s new data center fabric solution promises to provide full programmability with deep telemetry, along with a modern operational toolkit to drive the extreme automation and scaling of our telco cloud, which is critical to drive future 5G services.”

Muhammad Durrani, Senior Director of Network Architecture at Equinix, said: “Equinix has been working with Nokia for many years and we’ve come to rely on its highly reliable and scalable networking solutions for our global interconnection services. We’re pleased to see Nokia getting into the data center networking space and applying the same rigor to developing a next-generation open and easily extensible data center network operating system, while leveraging its IP routing stack that has been proven in networks globally. It provides a platform that network operations teams can easily adapt and build applications on, giving them the control they need to move fast.”

Richard Petrie, CTO and Executive Director at LINX, said: “Having started early in our open networking journey, we’ve found that today’s data center network environments do not provide sufficient visibility or openness to enable the extreme automation that we require to scale our operations, without adding a lot of staff. Nokia’s approach of bringing a new level of robustness and creativity to disaggregated data center networks is very much needed. We are pleased to see established vendors like Nokia stepping into the game in a big way.”

Mark van Teunenbroek, Managing Director team.blue/nl, team.blue, the largest hosting company in Europe that is founder-led and has a strong focus on innovation, privacy and security serving 2.5 million customers in Europe, said: “Nokia is one of our main partners for our data center interconnection transport network in the Netherlands. Seeing them now bring a new level of robustness and creativity to data center networks demonstrates to us that Nokia understands our current and future needs as a hosting company. The network visibility and openness of Nokia’s SR Linux platform would give us the automation we need to grow and scale our operations for many years to come. We look forward to trialing Nokia’s new solution in our data centers.”

Alan Weckel, Founding Analyst at market research company 650 Group, said: “Hyperscaler demands for data center switching and routing are far different today than they were just five years ago. Nokia has combined its proven routing software with a totally open and easily extensible foundation to offer a new network operating system, automation platform and data center switches that address the new needs of hyperscalers, such as unlimited scale, agility and AI. Nokia continues to expand its cloud product portfolio just as 650 Group is estimating that total spending on Data Center Switching and Routing products should exceed $17B a year by 2024, with telco service providers and enterprises benefiting from the innovation occurring in the cloud for years to come.”

Basil Alwan, President of IP and Optical Networks at Nokia, said: “With decades of experience serving the world’s telecom operators, we understand the engineering challenges of building and operating business and mission-critical IP networks on a global scale. However, today’s massive data centers have their own unique operational challenges. The SR Linux project was the proverbial ‘clean-sheet’ rethink, drawing from our partnership with Apple and others. The resulting design is impressive in its depth and strikes the needed balance for the future.”