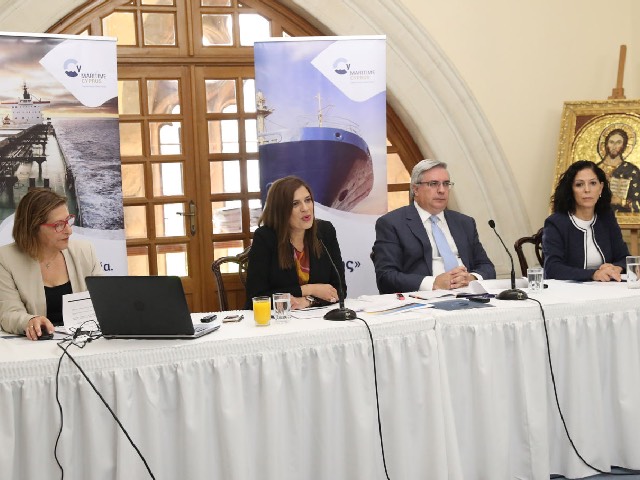 Ms. Pileidou stated that the action plan implemented by the Deputy Ministry of Shipping is focused on the pillars of the National Strategy for further development of the Cyprus shipping. In particular, the efforts made to upgrade the services provided and the transition to the digital age, the promotion of Blue Development as well as the improvement of security levels and the protection of the environment were emphasised.

During the conference, Ms. Pileidou referred to the success of the re-establishment of the tax system in Cyprus by the EU for another 10 years. “This development ensures a stable climate of trust and confidence in the shipping industry,” she said.

She also referred to the upgrade of the image of Cyprus as a shipping center, to the measures to improve the competitiveness of the Cypriot registry by revising the pricing policy and simplifying the ship registration procedures. Emphasis was also placed on measures to support shipping during the pandemic crisis.

“The coveted sea connection between Cyprus and Greece had a positive outcome,” said Ms. Peleidou. After months of consultations with the European Commission’s Directorate-General for Competition, which began in July 2019, the Ministry of Shipping has secured the EU’s approval to provide a maximum subsidy of 6m euros a year to reopen Greece’s Cyprus connection.

According to the decision of the General Directorate of Competition dated July 3, 2020, the operation of the sea passenger line between Cyprus and Greece is considered a General Financial Interest Service in accordance with current European Union rules and can be financed by government funds.

“We are very happy for this positive development,” said the Deputy Minister of Shipping to the President, Ms. Natasa Pileidou. “We have taken an important step towards the implementation of this project, as obtaining approval from the European Commission is crucial and a precondition for further action. However, there is still a long way to go as the next step is to hold an open competition “, Ms. Pileidou explained.

The Cyprus-Greece Maritime Connection will be operated by a passenger ferry, Ro-Pax, which will carry passengers and their accompanying vehicles as well as cargo, and will include the return cost from the port of Limassol or Larnaca to Piraeus and possibly one intermediate station. The route, which will run once a week during the summer months (May-September) and once every two weeks during the winter months (October-April), is expected to enrich the available means of transport and create a new market segment for consumers / travelers to / from Cyprus and Europe.

“The goal of the Deputy Ministry of Shipping,” Ms. Pileidou noted, “is to strengthen Cyprus’ connectivity with mainland Europe.” Currently, the only means of transport available to and from Cyprus is by air. “