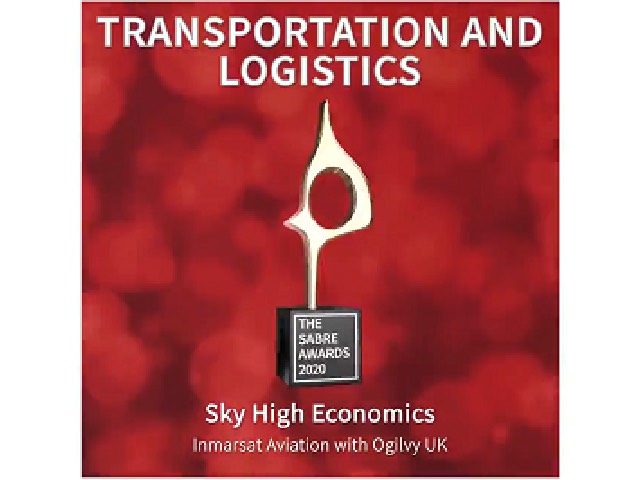 Inmarsat Aviation has been named a winner at this year’s SABRE Awards alongside its marketing communications agency Ogilvy, marking their second joint accolade at a prestigious PR award ceremony within a month.

Business resultsSABRE stands for ‘Superior Achievement in Branding, Reputation and Engagement’ and the competition has a 30 year heritage in the U.S. where it originated. The awards are described as “the world’s largest competition for public relations campaigns”, attracting close to 6,000 entries from around the world.The award was presented in recognition of our highly-acclaimed ‘Sky High Economics’ report with the London School of Economics (LSE) and follows a similar recognition at the recent CIPR Excellence Awards 2020.

“In a hyper-competitive landscape, these awards focus on what makes PR special: elegant solutions to complex problems, creativity across multiple channels and platforms; and most of all, business results,” says Paul Holmes, who founded the competition.

The Sky High Economics series includes three distinct chapters, released over a three-year period, uncovering for the first time the real monetary value of inflight connectivity (IFC), shaping the debate around the benefits to airlines, looking at how it enhances ancillary revenues, airline operations and passenger loyalty.

Inmarsat Aviation Vice President Dominic Walters stated the SABRE and CIPR awards were testament to the remarkable team efforts from everyone that contributed to the success of Sky High Economics from Inmarsat Aviation, Ogilvy, the LSE and beyond.

“The Sky High Economics series has been an overwhelming success and was designed to provide valuable insights into the opportunities that connectivity provides to the global aviation industry, from important cost savings and efficiencies in operations and safety to exciting new revenue streams and enhanced passenger loyalty from inflight broadband,” he explained.

“The feedback from airlines was extremely positive. They felt the series answered many of the burning questions on their minds and helped them develop tangible business cases for their operations. We are delighted to receive two major PR awards, which not only recognise the impact of Sky High Economics, but also acknowledges a highly successful global PR campaign that resulted in hundreds of positive articles around the world, covering both the aviation and mainstream media.”