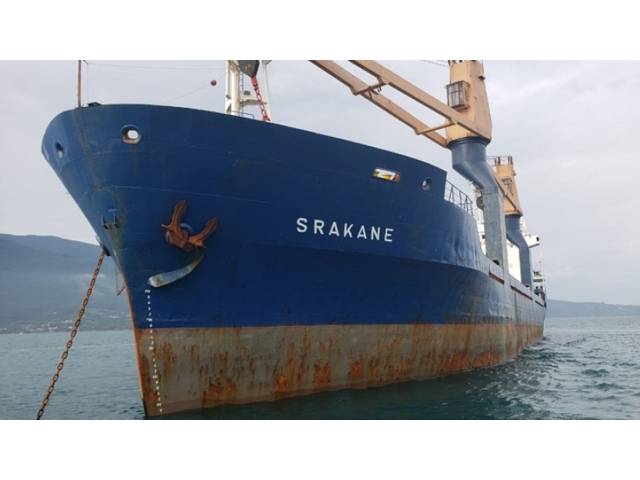 There’s 11,086 kilometres between São Sebastião, Brazil and the capital of Ukraine, Kyiv. It’s those eleven thousand kilometres ITF Inspector Renialdo de Freitas has been working to get 16 Ukrainian seafarers back across, to their homes and families. With their wages.

The seafarers are the crew of a Panamanian-flagged vessel, the Srakane.  The ship has been laid up in the São Sebastião Channel for more than three weeks. The seafarers want to go home – but they also want their employer to pay their outstanding wages before they leave the vessel. They are owed collectively over USD180,000.

The ship came to Brazil from Morocco in early June, calling in to a number of ports before anchoring in São Sebastião. The crew refuse to go any further until they receive their wages, which haven’t been paid in at least seven months. The captain has gone four months, and one crew member has not been paid for almost a year.

During the challenging economic times of Covid-19, it was more important than ever that crew from labour-providing nations like Ukraine to be paid in order to send back wages to their loved ones at home, said Nataliya Yefrimenko, ITF Inspector based in Ukraine.

“Seafarers like those aboard the Srakane have left their families and homes for months at sea with the promise by their employers that they would be paid regularly and repatriated when their contracts finished. Now it is clear that their employer is breaking their obligations, and that will be having a large impact on families back home who rely on those wages. There is no welfare state to fall back on – families need these incomes,” said Yefrimenko.

With the Panamanian-flagged ship’s owner unable to pay the wages owed to the crew or cover the cost of repatriation, the situation was deteriorating for life on board the ship in the São Sebastião Channel. A Brazilian news outlet reported:[1]

With the tense atmosphere on board, workers also complain about the ship’s captain, a Croatian national, of constantly threatening them not to report.

There was criticism of the lack of supplies on board, as the ship was at anchor for almost a month at the port of Salvador in Bahia, awaiting instructions to proceed to the next destination.

A request for help from a crew member (Chief Officer) was made to the Brazilian authorities claiming to have been attacked by the ship’s captain. Subsequently, the crew made another cry for help, this time claiming that the supply of water and food would be running out.

The situation of the crew is considered serious, requiring humanitarian aid …there is a risk of strike or riot on board.

Following reports such as these and complaints from the crew, Brazilian labour author ties acted, boarding the ship and ensuring the charterer, Seachios Ltd, provided fresh water and food to the crew. The authorities also made sure crew received medical and dental assistance. With their immediate welfare needs met, the crew’s attention has turned to recovering their wages and returning home.

ITF Inspector Renialdo De Freitas, who lives a four-hour drive from where the ship is anchored, said when the owner did not fulfil his obligations to pay back the wages by the deadline the ITF had given, the organisation pushed for detention.

As a result of the ITF’s action, a Brazilian Federal Labour Prosecutor began proceedings against the ship’s manager in the São Sebastião Regional Labour Court, requesting the ship be detained until the outstanding wages were paid.

As authorities began to mount a case against the various owners, managers and charterers of the ship, ITF support has be critical. De Freitas has been assisting the prosecutor with details of the case via videoconference, while working on other angles to see the crew’s wages paid.

While it seems increasingly unlikely that the ship’s owner will pay the wages owed to the crew, the prosecutor has started processes that could see the wages recovered from Seachios Ltd, the company which negotiated the charter of the ship to Brazil. Through this method, Seachios Ltd would be responsible of collecting the money from the investors to pay the outstanding salaries and repatriations.

“In an encouraging sign, Seachios Ltd accepted the prosecutor’s proposal. We hope that this solution can be sorted by the end of the week through either method,” ITF Inspector Renialdo De Freitas said.

“The ship is registered with the Hanseatic P&I club as the financial security provider. I am working with the crew in claiming abandonment, maintenance, repatriation and the payment of back wages. We are trying every avenue to get these seafarers their wages and tickets home to Europe,”

“Covid-19 has meant disrupted trade routes and made it even more likely some companies will not survive this pandemic. For crew, that could make it much more difficult to recover their unpaid wages. I hope for a good outcome for the crew of the Srakane,” said de Freitas.

[1] The original report has been translated by the ITF into English for the purposes of this article. No responsibility is taken for unintended errors.