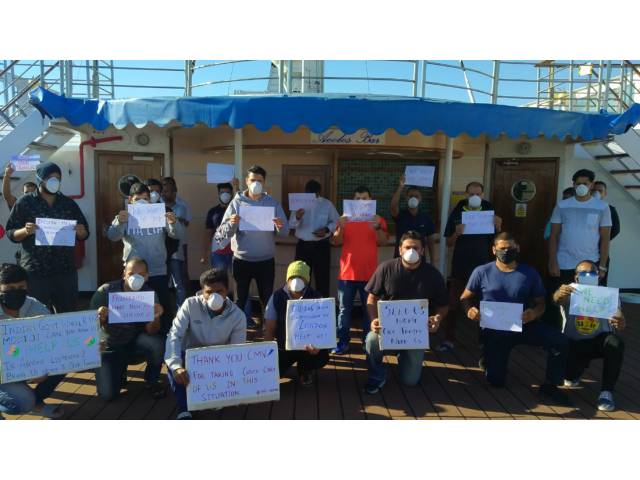 The ITF has been assisting stranded crew at Tilbury and Bristol

Four months without pay and 48 hours without food, 47 seafarers off the coast of the UK are desperate to get home to their families.

The mainly Indian crew are from the passenger vessel Astoria. They began a hunger strike demanding the wages owed to them and repatriation home in mid-June, after weeks of pleas to their employer proved fruitless.

When the hunger strike began, things moved quickly. The chief executive of Cruise and Maritime Voyages (CMV), which runs the Astoria, gave the crew assurances to meet their demands.

Subsequently, UK port state control boarded and detained the vessel, suspecting breaches under the Maritime Labour Convention. The Maritime Coastguard Agency boarded and detained the Astoria and four other CMV ships at London Tilbury and Bristol Avonmouth. Authorities were alerted to and took action before the company could direct the Astoria to its home port in Portugal, where prospects would be slim for repatriation to the seafarers’ home countries.

Worldwide, the 47 striking crew count among the more than 200,000 seafarers trapped on vessels unable to return home during the Covid-19 pandemic. The broader group stranded at Tilbury and Bristol on the Astor, Astoria, Columbus, Magellan, Vasco da Gama and Marco Polo vessels number 1,449 seafarers in total. There are nationals from Indonesia, India, Myanmar and the Mauritius amongst them. 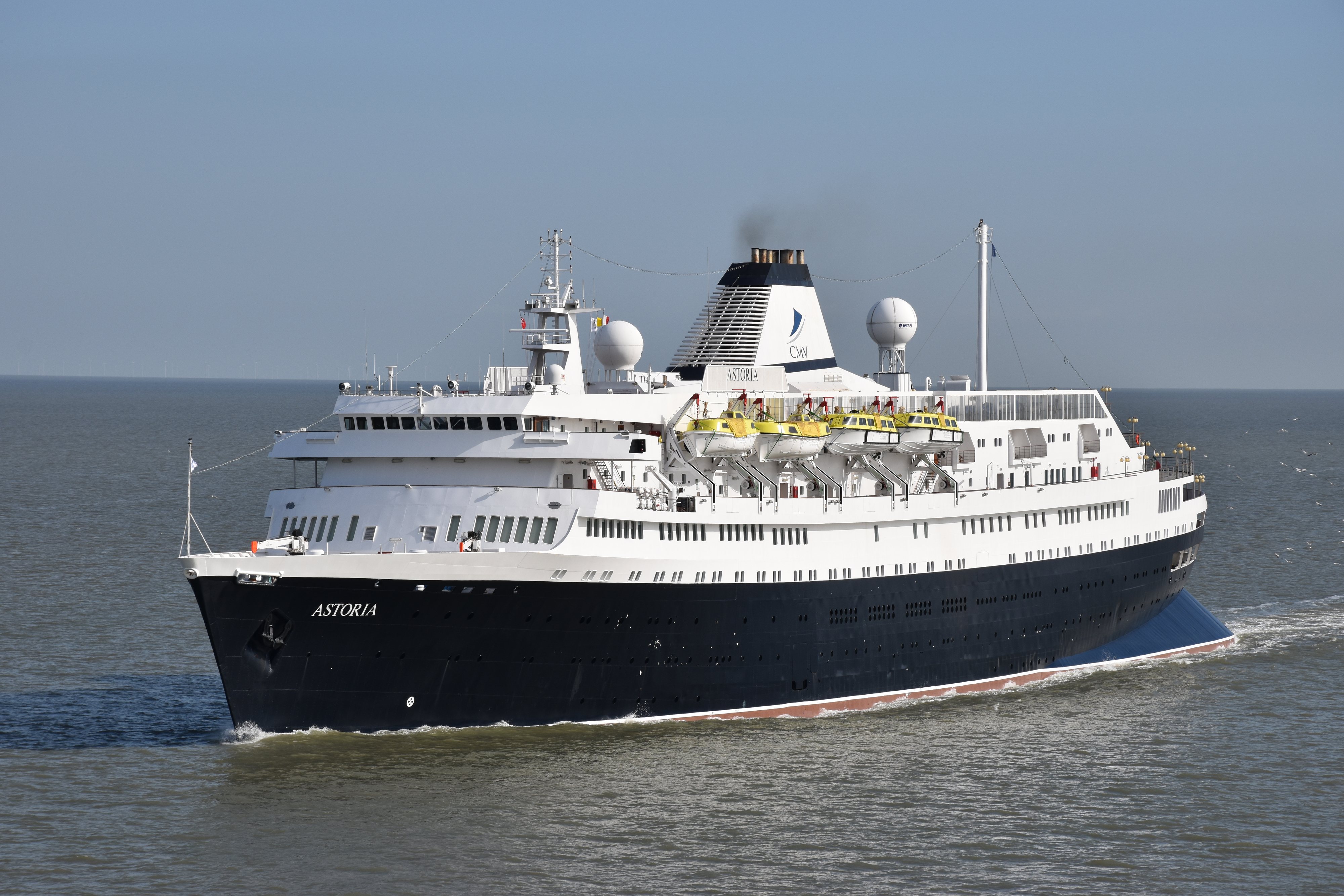 The lack of ability to get off and get home due to the crew change crisis has been made worse by CMV failing to pay wages and communicate with the stranded crew about why.

One crew member, Arjuna (not his real name), who took part in the hunger strike, spoke of how crew wages stopped as soon as the pandemic started. CMV was forced to abort its world tour, when the ships were in Indonesia in early March. It was at that time that ‘home allotments’, the portion of seafarers’ wage that is sent to their family, also stopped.

Arjuna’s wife is back home in India. She is a graduate engineer, but out of work. Arjuna’s wife lives with his mother, who earns some money as a housemaid. They’re wondering when he will get home.

Like many seafarers, Arjuna has been the family breadwinner. He’s been so since an early age, having his father die when he was only four. To support his family, Arjuna trained and worked in hotels before going to sea in 2007.

“I am worried about my family,” he said, “I’m worried when I go back home there will be no jobs. But if the company pays me all my wages, we have money enough to get by for five, or six months.”

Arjuna says many of his shipmates are worse off than he is. “Some have big loans to pay, some can’t afford medication for their family, he said.

So who are the crew at the centre of this story? What are their concerns, and for how long have they been fighting?

Correspondence forwarded to the International Transport Workers’ Federation shows how their pleas ignored by the company led them to desperation. In early June, one of the crew wrote: “We are desperately in need of financial support… We are very worried about our families who are depending mostly on us (for) our loan dues, children’s’ education and medical expenses.”

In that correspondence, the company provided no explanation of why crew wages had stopped being paid, raising concerns the cruise line could be in financial trouble. The crew from the Astoria read reports in the media that the ship’s operator, CMV, failed to secure a £25 million loan from Barclays bank last week. Arjuna suspects the company is using their wages to stay afloat.

Writing from aboard the ship, a crew member said “Most of us have finished our contract and our salary has been kept on hold. For what … and why? All we get to hear is they are trying,” the crew wrote. “Our concern is that it’s been over 90 days. What’s taking so long?  We really don’t know if company is actually trying to repatriate us.”

The urgency driving the crew’s concerns is not only about the need to get home, unpaid wages and a lack of communication. Life stranded at sea is having taking its toll on their physical and mental wellbeing. A man in his forties, the first cook, died of a heart attack. Some crew have been running out of medication onboard. One crew member even attempted to take his life. His shipmates say they are worried that there will be more.

Increasingly concerned and desperate for answers, the Astoria’s crew opened Gmail and Twitter accounts and posted a video on Youtube. They made a direct plea to both the Indian and British prime ministers via Twitter: “Hear our Voices… We need help before we have more deaths Onboard. Save lifes. Help us get home safe to our families,” they wrote.

When the crew’s appeal hit the digital airwaves, their voice carried far. The Guardian, the BBC, and Sky rushed to cover the unfolding hunger strike. What was the story these stranded seafarers wanted to tell? And how was CMV going to fix it?

Publicly, CMV’s management made assurances the company was working with British and Indian authorities to arrange a charter plane to take them home. All wages would be paid, they assured the crew. They said border lockdowns due to the Covid-19 pandemic made things difficult to get them home. But how hard had they been trying? And the unpaid wages would be paid when, exactly?

“It is the COMPANY [his emphasis] bringing you back home, however we need your government’s landing permit for the airlines. I understand that this shall happen now,” a CMV manager wrote in emails to crew forwarded to the ITF.

Crew are sceptical. Especially about the money the company owes them. Arjuna said it is his family that he worries about most. They are running out of savings since the home allotments stopped.

“If I knew money was reaching my family, I would have no problem staying a bit longer on the ship, while they find us flights home,” Arjuna said.

The ITF has been speaking with the Astoria crew for some weeks now, who are mostly represented by Italian ITF affiliate FIT-CISL. Together, the ITF and FIT-CISL has been working behind the scenes with the company and the embassies of the seafarers’ home countries to make a plan to get them home.

ITF Inspector Liam Wilson boarded the Astoria, and its sister ships after they were detained, to check on the crew and link them with support services. Liam is being supported by ITF Inspectorate Coordination Supervisor Finlay Mcintosh, who has also been speaking to crew.

“Tensions are rising,” the ITF’s Mcintosh said. “If there is no action or undertaking from the company to at least pay some of the owed wages, then this situation could escalate very quickly and spread to other vessels. Then we are looking at thousands of seafarers taking action in the port of Tilbury, London, UK and the crew members rightly will get a lot of support from other workers, community and media.”

“Obviously the crew are all desperate to leave and return to their families,” Mcintosh said.  “But they say that they will take further action if the company does not comply to their contractual obligations. We’re here to support them doing what they think is right to get paid, get off and get home to their families. We’re here all the way,” he said.

The Astoria crew are now in dialogue with CMV’s chief executive. The five detained vessels have been brought alongside at the Tilbury passenger terminal, but crew won’t get off until they receive all their owed wages. Staying on board the multi-million dollar vessel is some of most important leverage they have. And they could yet go on hunger strike again.