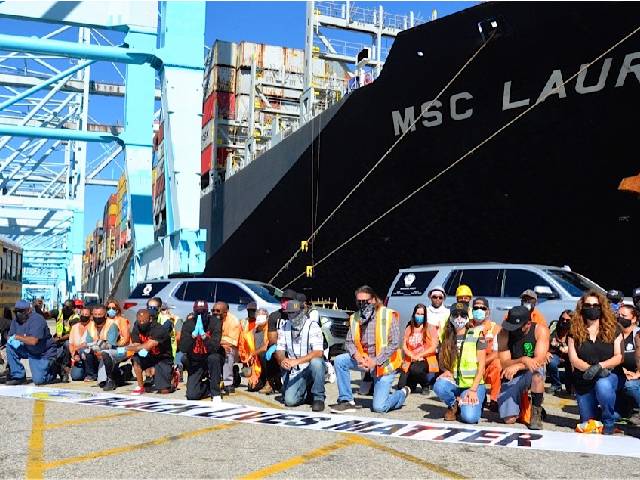 ILWU dockworkers at 29 West Coast ports will stop work for eight hours on Friday, June 19, in observance of Juneteenth – the date in 1865 when Black slaves in Texas first learned of their emancipation.

“Juneteenth has long been recognized by the African-American community, but for many others it was unknown until now – as our nation, in the wake of George Floyd’s murder, refocuses on ways to address ongoing, systemic racial injustice,” said ILWU International President Willie Adams. “Thousands of dockworkers will stop work for the first shift on June 19, 2020, to show their commitment to the cause of racial equality and social justice.”

The plans for June 19 follow a brief action on June 9, when ILWU dockworkers stopped working for nine minutes to pay tribute to Mr. Floyd in conjunction with his funeral service in Houston, Texas.

“Juneteenth commemorates the end of slavery in the United States,” said ILWU International SecretaryTreasurer Ed Ferris, who attended Mr. Floyd’s memorial on June 8. “It’s appropriate and necessary for us to acknowledge this history in the search for ways to end racism and restore justice for all Americans.”

ILWU International Executive Board member Melvin Mackay also attended Mr. Floyd’s memorial. “It’s been 157 years since the Emancipation Proclamation,” said Mackay, “but our nation remains plagued by systemic racism, as the murder of Mr. Floyd so tragically demonstrated. We can and must do better.”

Events celebrating Juneteenth and the push for racial and social justice are being organized by dockworkers at West Coast ports, including Los Angeles/Long Beach, the Bay Area, and Puget Sound.

“On June 19, I’ll be supporting my union brothers and sisters in Southern California,” said International Vice-President Bobby Olvera, Jr., who represents ILWU members on the mainland. “We feel compelled to act on June 19 against racism, hate, and intolerance, while our nation endures a devastating pandemic and painful new wounds from a President who prefers division over unity.”

President Adams said, “We’re approaching June 19 in the spirit of our Union’s founders, including some who gave their lives in 1934. We still live by their creed: ‘an injury to one is an injury to all.’”