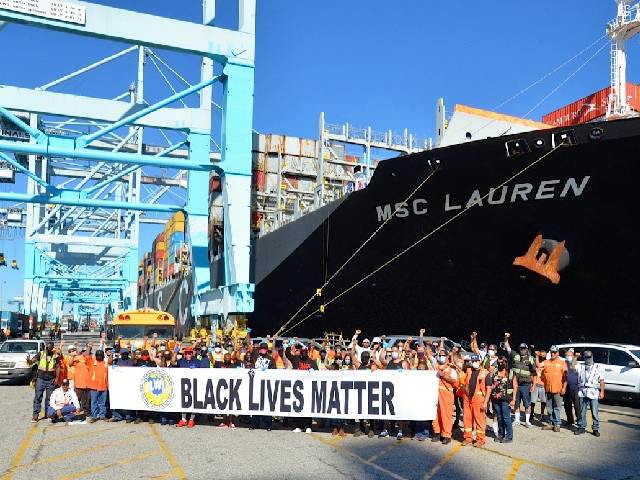 The ILWU members are stopping work for nine minutes – the same amount of time George Floyd’s neck was knelt on by the Minneapolis police officer who murdered him, while Mr. Floyd begged for his life. At the same time our sisters and brothers from the ILA are holding peaceful protests in their docks for an hour.

America’s maritime unions have a proud history of fighting injustice at home and abroad. In a statement the ILWU Longshore Division declared that “It’s time for the ILWU, in keeping with our history of fighting for racial and social justice, to be heard.”

ILWU International President Willie Adams said “Our union has a long history of confronting racism on the job, in our communities and around the world,”

“Today we’re joining millions of people who are demanding justice and fundamental change. The union calls on all elected officials in local, state, and the federal government to open their eyes and hearts, to initiate real change in our current system, and root-out institutionalized racism and police brutality that have plagued our country and our citizens for far too long.  ”

ILA International President Harold J. Daggett, said “Together we will shut down our cranes and computers; power off our equipment to pause and reflect on how we can find a way to be better as individuals and a country where all citizens should be guaranteed the same respect, freedoms and liberties.”