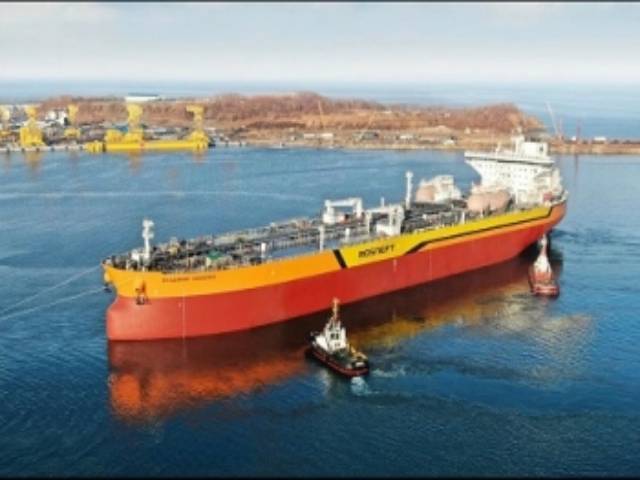 The first Russian Aframax tanker “Vladimir Monomakh” was heaved off at the Zvezda Shipbuilding Complex.

The powerful new-generation tanker is designed to transport oil in unrestricted navigation. The vessel is designed in compliance with high environmental safety standards. The main and additional power supply units can operate on both traditional and green fuel, the liquefied natural gas, which meets new world environmental standards.

The launch of the first vessel on Zvezda was a unique operation. The Aframax tanker was launched with the Vympel floating transfer dock, one of the largest in Russia. Preparation for the launch took almost a day. Within this time, the tanker was rolled by a vessel trolley-transporter from the open outfitting slip to the floating dock, and then taken to the waters.

Sea trials will include checking the reliability and vital functions of power units, navigation equipment and other systems, as well as maneuverability and other functions, Russia’s Rosneft said in its statement.

To carry out sea and mooring tests, more than 300 tons of DMF fuel type III were delivered to the tanker. The sulfur content of the DMF fuel does not exceed 0.5 per cent, which fully complies with the requirements of the International Convention for the Prevention of Pollution from Ships (MARPOL).

The bunkering of the vessel of this class was first performed by Rosneft Bunker.

The construction history of this type of tankers has begun with the visit of President of the Russian Federation Vladimir Putin to the Zvezda Shipbuilding Complex in September 2017. It was then that a package agreement was signed for the design, construction, technical supervision, operation and training of the crews of 10 Aframax class tankers.

On September 11, 2018, in the presence of President of the Russian Federation Vladimir Putin, the laying of the first Aframax class tanker with a deadweight of 114 thousand tonnes took place.

Prior to heaving off the first tanker, four Aframax tankers were in production at the heavy outfitting berth, and metal cutting was carried out for the fifth one in February 2020. The vessels are being built for Rosnefteflot. Aframax tankers will be the first of this class built in Russia. The tankers are equipped with the most advanced class A automation system. High sustainability of the tankers is especially important for the work in the Arctic region.