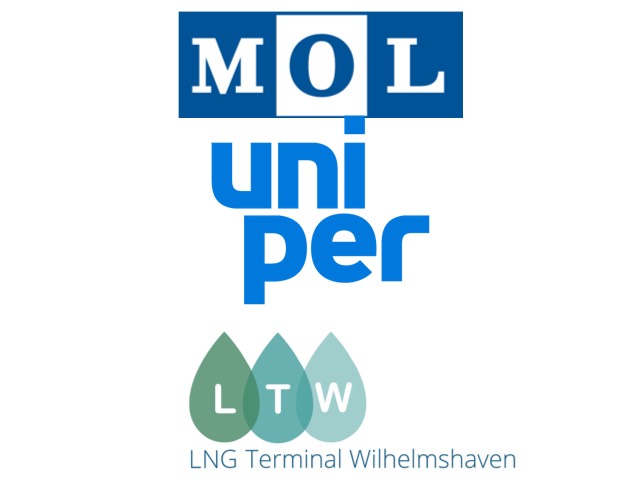 MOL (Mitsui O.S.K. Lines, Ltd., Tokyo, Japan) and LTW (LNG Terminal Wilhelmshaven) have signed a contract to build and charter an LNG terminal ship⁠—known in the industry as a Floating Storage and Regasification Unit (FSRU)⁠—for the planned LNG landing terminal in Wilhelmshaven on the North Sea. LTW is the project developer and operator behind the future LNG terminal in Wilhelmshaven and a fully owned subsidiary of Uniper S.E. The FSRU will be built in a shipyard belonging to South Korean company DSME (Daewoo Shipbuilding Marine Engineering Co., Ltd., Geoje, Korea), and then chartered by LTW for 20 years. It has been planned and custom designed by the two contracting parties in accordance with the local and environmental requirements for the German market and the Wilhelmshaven site.

The FSRU constitutes the heart of the future terminal and will make it possible to offload, store and regasify LNG for the German market. It will be moored off the coast not far from Wilhelmshaven and will handle incoming LNG tankers there. The regasified gas will then be pumped from the FSRU along a short connecting pipeline under the sea to the port facilities and finally fed into the German gas transmission network. This eliminates the need to construct complex regasification facilities on land. This optimized planning will minimize the environmental impact both on land and on the seabed by a non-disruptive crossing of the natural habitat identified in the environmental studies.

Uniper Member of the Board and Chief Operating Officer David Bryson says: “The agreement to build and charter this FSRU is an important milestone for both parties on the journey to establishing an LNG terminal in Wilhelmshaven; it underlines the joint desire for collaboration on this ambitious project. This new agreement will build on the successful and trusting collaboration with MOL on previous major projects in the LNG ship market. The LNG terminal in Wilhelmshaven is a long-term project based on the prediction that demand for imported natural gas on the German and European energy markets will increase significantly over the coming years. Based on Uniper’s many years of experience in the European gas business and project management, LTW is pushing ahead with the terminal project in Wilhelmshaven to give companies from all over the world optimal access to customers in Europe ⁠— and, vice versa, to open up a new supply channel for customers.”

MOL Executive Officer Hiroyuki Nakano says: “We are excited to move one step further to materialise Germany’s first Liquefied Natural Gas receiving project. Our Floating Storage and Regasification Unit of some 263,000m3 storage capacity is of a unique tailored design to meet all customer requirements to provide economical regasification service and comply with German Environmental Regulations. Our mission from this special moment is to execute the project and deliver the unit on time. MOL has expanded its global FSRU business over the past few years. We are confident that our operational and technical experience gained will enhance the project in Germany and provide a seamless, safe and efficient service to LTW.”

Wilhelmshaven is Germany’s only deep-sea port and has the optimal infrastructure for offloading LNG tankers of all sizes. LNG ships are often hundreds of meters long, but they can land and turn here without difficulty. This removes the need for time-consuming maneuvering, which offers a significant economic advantage over other ports. Its proximity to the German long-distance gas pipe network and to important gas storage facilities makes integrating the system into the gas infrastructure comparatively simple and cost-effective. It was for reasons such as these that Uniper decided to press ahead with the project for a floating LNG terminal for Germany at this location and to win over partner companies.

It is expected that a competitive tender process will be carried out in the summer of this year to check the binding interest expressed by potential customers. Once the approval process for the project is completed, the final investment decision will be made subject to economic viability.

The market for LNG has developed very dynamically over the last few years. Despite more LNG terminals being built in Europe in recent years, the significant decline of domestic natural gas production in Europe makes further expansion both a sensible and necessary course of action for the gas industry. It is also needed to enable the import of organic LNG and to advance the energy transition in Europe through the safe use of natural gas. LNG capacities have been utilized more and more since 2018, as LNG has become more competitive in price in relation to gas supplied via pipelines.